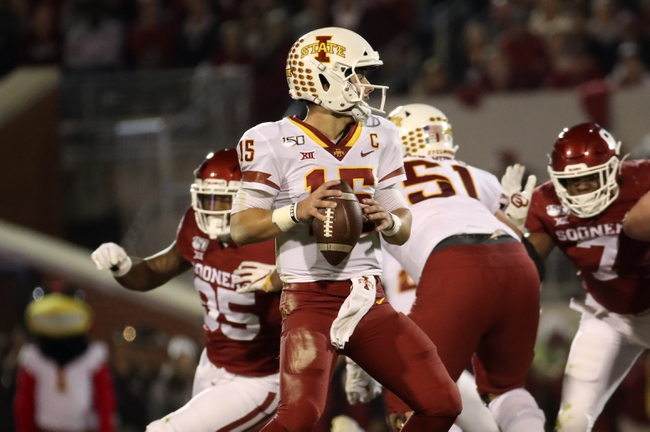 The Iowa State Cyclones will be looking to build off of a 2019 campaign that saw the program finish in the middle of the Big 12.  Iowa State finished the 2019 season with an overall record of (7-6), while having a Big 12 record of (5-4). The offense averaged 32.2 points per contest, which ranked 39th at the FBS level.  The defense allowed an average of 25.9 points per contest, which ranked 50th. The program is under the direction of Matt Campbell.

The offense was guided by quarterback Brock Purdy.  Purdy passed for 3,982 yards and 27 touchdowns, while throwing 9 picks.  The quarterback also added 8 rushing touchdowns. He will be back for his junior season.  Breece Hall had a successful season out of the backfield, rushing for nearly 900 yards and 9 touchdowns as a freshman.  Wideout Tarique Milton is back for a junior season, after hauling in 35 receptions for 722 yards and 3 touchdowns.

As a team, the defense totaled 28 sacks and 6 interceptions.  The defense was led by linebacker Marcel Spears Jr. Spears collected 92 tackles and 2.5 sacks, but played his senior season during the 2019 campaign.  Linebacker O’Rien Vance is back for a junior year, after leading the defense in sacks as a sophomore with 6.5. Defensive back Lawrence White was 2nd on the team in tackles with 84, while also recording 2 interceptions and 4 pass break ups.  He will be a senior during the 2020 season.

Let us take a look at the Iowa State schedule for the 2020 season.

The win total is projected at 7.5 and with the amount of talent that returns on offense, Iowa State should be able to hang with just about anyone.  Quarterback Brock Purdy will have his running back and one of his favorite wideouts from a season ago. Look for Iowa State to improve off of last season and could be a dark horse to compete at the top of the Big 12.  I’m going to take the over, as Iowa State plays some of their tougher games at home, which will bode well in getting wins on the road against lesser competition.