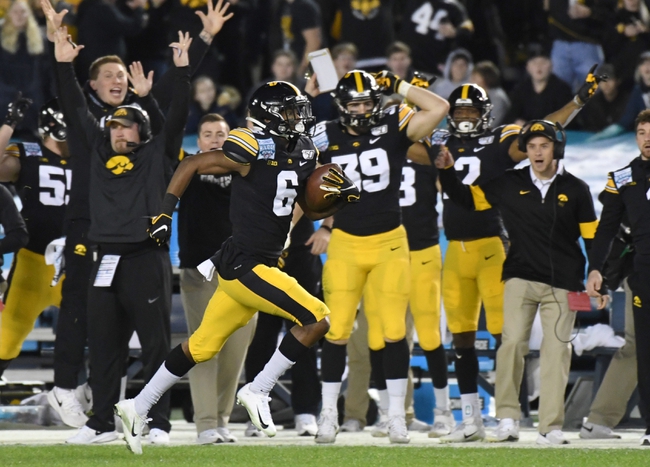 The Iowa Hawkeyes will be hoping to mirror their 2019 season at the worst.  Iowa finished the 2019 season with a (10-3) overall record, while having a solid (6-3) record in the always tough Big Ten conference. The offense averaged 25.8 points per contest, which ranked 88th at the FBS level.  The defense was top 5 in fewest points allowed, having allowed just 14 points per contest. The head coach is Kirk Ferentz.

Iowa will be looking to replace starting quarterback Nate Stanley.  Stanley passed for 2,951 yards, while throwing 16 touchdowns and 7 interceptions.  Spencer Petras looks to be the guy in line, after seeing limited time as a freshman.  Petras completed 6 passes for 25 yards as a freshman. He did have 1 rushing score. Running back Tyler Goodson rushed for 638 yards and 5 touchdowns, he returns for the 2020 season.  The top 2 wideouts from a season ago return. Ihmir Smith-Marsette reeled in 44 receptions for 722 yards and 5 touchdowns. Tyrone Tracy Jr. collected 36 receptions for 589 yards and 3 scores.

The defense registered 33 sacks, while collecting 12 interceptions.  The defense will have to overcome defensive end AJ Epenesa. Epenesa recorded 11.5 sacks a season ago and is expected to be a 1st round draft pick. Linebacker Joe Evans had just 7 tackles, but recorded 4 sacks, which is the most for a returning player from the 2019 campaign.  Michael Ojemudia was the leader in the secondary, but he was a senior a year ago. Ojemudia had 3 interceptions and 9 pass break ups. Matt Hankins returns after totaling 58 tackles, 2 interceptions, and 7 pass break ups.

Let us take a look at the Iowa schedule for the 2020 season.

The Hawkeyes open the season against in-state foe Northern Iowa.  Iowa will then welcome Big 12 member Iowa State. The last non-conference matchup is a home game against Northern Illinois during week 4.  A 3-0 record in non-conference play is very possible for Iowa.

The projected win total is set at 7.5, which would mean Iowa would need at least 5 conference wins for a cover.  However, Iowa has a tough conference schedule. The Hawkeyes will have to travel to Ohio State, Penn State, and Minnesota, while playing host to Wisconsin.  Iowa should be able to beat Northwestern, Nebraska, and Michigan State. This would mean Iowa would have to win at Illinois and Purdue in order to get a cover, if the rest of the results lay out like they should.  Although, with a new quarterback under center and key players leaving from the defensive side, I’m going to take the under, as a 7-5 season seems more appropriate than banking on Iowa to beat the tougher teams in the conference.