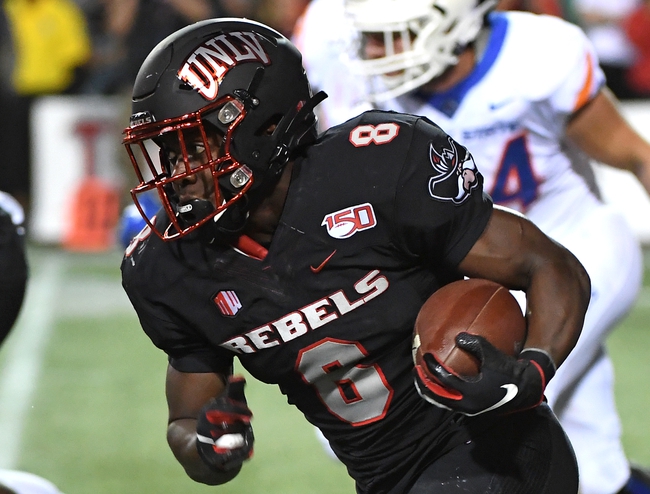 The UNLV Rebels will be aiming for higher expectations after finishing at the bottom of the Mountain West on the West division side.  UNLV had an overall record of (4-8), while going (2-6) in conference play. The offense averaged 24.2 points per game, ranking 97th in that department.  The defense allowed 33.0 points per contest, which was 108th in the FBS. The program is under the direction of Tony Sanchez.

The offense was guided by freshman quarterback Kenyon Oblad.  Oblad passed for 2,081 yards and 18 touchdowns, while throwing 9 picks.  The quarterback received valuable experience as a freshman, which should help him during his sophomore season.  Running back Charles Williams rushed for 1,257 yards and 11 touchdowns, averaging nearly 6 yards per rush. Williams will be entering his senior season for the 2020 campaign.  Wideout Randal Grimes hauled in 44 receptions for 696 yards and 7 touchdowns as a sophomore.

As a team, the defense totaled 12 sacks and 9 interceptions.  Defensive back Jericho Flowers had a nice season in the secondary, collecting 4 interceptions, while having 12 pass break ups.  The leading tackler was linebacker Rayshad Jackson with 99 total tackles. Both players were seniors during the 2019 campaign.

The defense in general will need to improve during the 2020 season if UNLV wants to move up the standings.  The pass rush wasn’t great, averaging just 1 sack per game.

Let us take a look at the UNLV schedule for the 2020 season.

The projected win total is set at 3 wins for the 2020 season.  UNLV does not have New Mexico on their schedule for the 2020 season.  New Mexico went winless during the 2019 season in conference play. The Rebels do have home games against Colorado State and Fresno State.  Both of those programs had below .500 records last season. Those two matchups will be at UNLV. The offense should improve for the 2020 season, but the defense is still a work in progress.  I like UNLV to get 2 conference wins and maybe get a home win in one of their first 2 non-conference games. With the defense that UNLV has, I can’t see the Rebels getting more than 3 wins, while playing a pretty tough Mountain West Conference slate.  I’m going to take the under here, with UNLV getting a push at best.