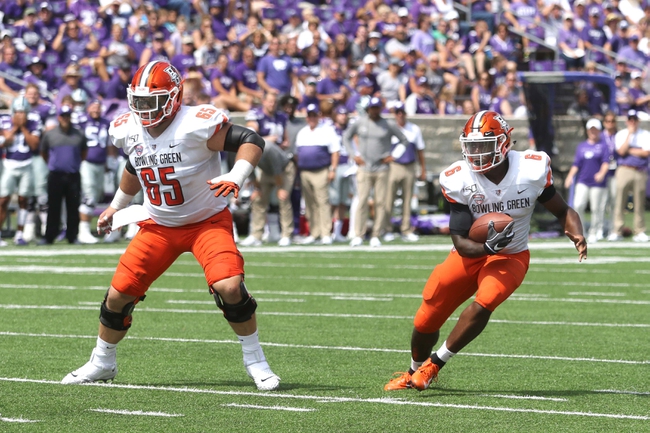 The Bowling Green Falcons will be looking to improve off of a 2019 campaign that saw an overall record of (3-9), while going (2-6) in MAC play.  The offense averaged just 16 points per contest, which ranked 128th out of 130 FBS teams. The defense was almost in the cellar as well, after allowing 38.6 points per game.  The defense ranked 126th in points allowed per game. The program is under the direction of Scot Loeffler.

The Bowling Green offense was led by quarterback Grant Loy.  Loy passed for 1,137 yards, while throwing 6 touchdowns and 11 interceptions.  Loy also added over 425 yards rushing and 4 scores. Running back Bryson Denley rushed for 544 yards and had 7 total touchdowns as a junior a season ago.  Tight end Quintin Morris guided the receiving core with 55 receptions and 649 yards and 4 touchdowns.

As a team, the defense collected 24 sacks and 7 interceptions.  The defense was led in tackles by junior Kholbe Coleman. Coleman totaled 103 tackles.  As a sophomore, Karl Brooks had the team lead in sacks with 4.5. Defensive back Jordan Anderson registered 51 tackles, while having 7 pass break ups.

Let us take a look at the Bowling Green schedule for the 2020 season.

When looking at the Bowling Green schedule, the Falcons have a tough non-conference slate.  Bowling Green opens the season at Ohio State, then plays host to Robert Morris, and then goes back on the road to face Illinois.  A home matchup against Liberty rounds out the non-conference slate. The program struggled last season for consistency. This season doesn’t look much better.

A projected win total has Bowling Green at 2 wins.  The program should be able to get past Robert Morris.  However, that will more than likely be the only win for the Falcons in non-conference play.  Looking at the conference schedule the only game that stands out as a possible win would be at Akron.  Bowling Green doesn’t have to face the top 3 teams from the West division from a season ago. The defense was almost non-existent a season ago.  I’m going to take the under, as I just don’t see Bowling Green getting more than 2 wins, even with some of their key offensive players returning from last season’s team.