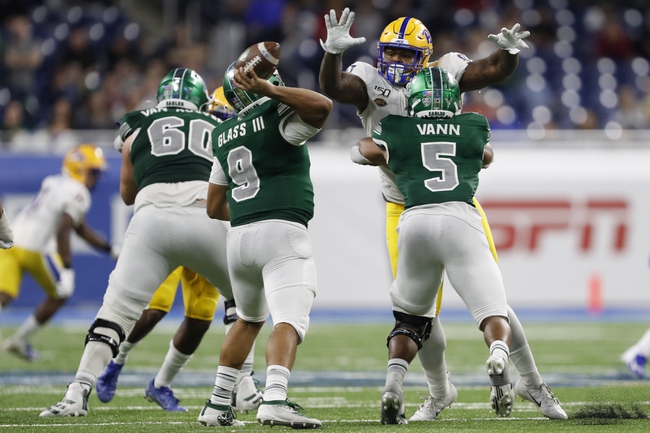 The Eastern Michigan Eagles will be looking to get back to a bowl game this season, while improving off their 2019 record.  Eastern Michigan finished with an overall record of (6-7), while going (3-5) in MAC play. The offense averaged 29.2 points per game, which ranked 65th in the FBS.  The defense ranked 87th, allowing over 30 points per contest. The program is under the direction of Chris Creighton.

The offense was guided by quarterback Mike Glass III.  Glass passed for 3,169 yards, while throwing 24 touchdowns and 11 interceptions.  Glass added 8 touchdowns on the ground. However, Glass played his last year of eligibility last season and Preston Hutchinson looks to be the guy for the 2020 year.  Hutchinson passed for 462 yards, while throwing 3 touchdowns and 1 interception, completing over 75 percent of passes. Running back Willie Parker looks to be in line for the running back job, after playing behind Shaq Vann the last 3 seasons.  Parker rushed for 142 yards and 2 touchdowns during the 2019 season. Quain Williams was 2nd on the team in receiving yards during the 2019 campaign. Williams recorded 661 yards, after hauling in 52 receptions, totaling 6 touchdowns. He returns for the Eagles.

As a team, the defense collected 22 sacks and 11 interceptions.  The defense was led in tackles by Kobie Beltram. Beltram had 127 tackles as a senior.  Defensive lineman Turan Rush recorded 5 sacks as a junior, which was a team high. Defensive back Brody Hoying registered 4 interceptions, while breaking up 6 passes, and totaling 81 tackles.  Hoying was a senior last season, as well as fellow secondary member Vince Calhoun. Calhoun was 2nd on the team with 108 tackles.

All in all the defense lost their top two tacklers and their interception leader.

Let us take a look at the Eastern Michigan schedule for the 2020 season.

The projected win total is set at 4 wins for the 2020 season.  Eastern Michigan is going to have to fill voids left from graduates.  Eastern Michigan will be replacing their quarterback, running back, and will have to overcome their leadership that was lost on defense.  The defense lost their playmakers due to graduation, in what was already a defense that was struggling. It is hard to imagine the defense improving enough to surpass this win total.  I’ll give Eastern Michigan a conference win over Bowling Green and possibly Toledo, to go along with a win against Coastal Carolina. The 3 wins will place the Eagles under the projected win total.  Therefore I’m going to take the under for the Eastern Michigan 2020 campaign.