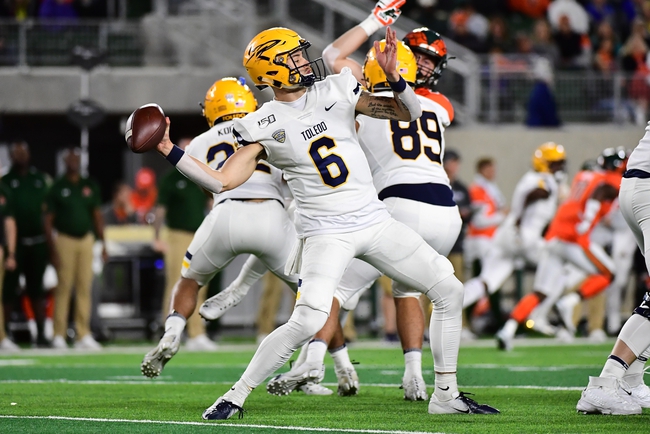 The Toledo Rockets will be looking to build off of a 2019 season that the program finished at (6-6), while going (3-5) in MAC play.  Toledo got off to a solid start during the 2019 season, starting the year 4-1. Toledo was 6-3 before losing the last 3 games of the season.  The offense averaged 27.2 points per contest, which ranked 75th in the FBS. The defense was not as good, as the defense allowed over 32 points per contest.

Toledo got off to a good start, thanks to quarterback Mitchell Guadagni.  Guadagni passed for 1,099 yards and 8 touchdowns, while also rushing for 4 scores.  However, Guadagni suffered an injury, which kept him out the rest of the season. Eli Peters took over and passed for 828 yards, while throwing 6 touchdowns and 3 picks.  Peters figures to be the guy under center at the start of the 2020 season. Running back Bryant Koback had an impressive season as a sophomore. Koback rushed for 1,187 yards and 12 touchdowns.  He will be back for Toledo in the backfield. Bryce Mitchell hauled in 35 receptions for 679 yards and 4 touchdowns. The wideout returns for his senior season.

The defense struggled with the pass rush, totaling just 15 sacks on the season, while intercepting the opposing quarterbacks just 7 times.  Saeed Holt led the team in sacks. Holt recorded 3.5 sacks and 74 tackles as a safety. Samuel Womack had just 2 interceptions in the secondary, but did have 12 pass break ups.

Let us take a look at the Toledo schedule for the 2020 season.

Toledo opens the season on the road against Tulsa, while also playing non-conference games against San Diego State, Michigan State, and Central Connecticut State.  A lot of these games will depend on how Peter’s can adapt into the full time quarterback roll. The wins were hard to come by after the injury to Guadagni. The Rockets have the chance to struggle in non-conference play, with possibly their only win coming at home against Central Connecticut State.  Seeing how bad the defense was last season, I’m not thrilled with the over, especially seeing how the non-conference schedule is laid out. I’m going to take the under here, as another 6-6 season looks appropriate.