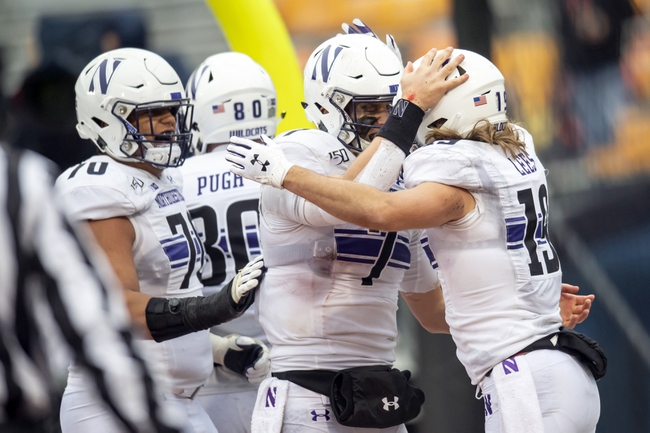 The Northwestern Wildcats will be looking to improve off their 2019 season.  Northwestern finished the season with an overall record of (3-9), while going (1-8) during Big Ten play.  The offense had a rough season trying to establish a fluent scoring game. The offense averaged just 16.3 points per game, which ranked 126th out of 130 programs at the FBS level.  The defense was pretty solid, allowing an average of 23.6 points per contest. The defense ranked 43rd in points allowed per game. The program has been under the direction of Pat Fitzgerald since 2006.

The offense saw 4 different quarterbacks attempt at least 10 passes a season ago.  Aidan Smith saw the most game reps at the quarterback spot. Hunter Johnson who was in the mix last season, looks to have a better chance this season to get the nod.  Johnson passed for 432 yards, while throwing just 1 touchdown and 4 interceptions as a sophomore. Drake Johnson had a solid year out of the backfield, rushing for 634 yards and 3 touchdowns. Wideout Riley Lees contributed 51 receptions for 430 yards and 2 touchdowns.

While the offense lacked success throughout the season, the defense kept the team in games.  As a team the defense totaled 24 sacks, while picking off opposing quarterbacks 7 times. The leading tackler during the 2019 campaign was Paddy Fisher and Blake Gallagher.  Both were part of the linebacking core and each totaled 88 tackles. The defense will have to overcome 9 sacks that defensive lineman Joe Gaziano contributed. Greg Newsome II added 11 pass break ups as a defensive back.

Let us take a look at the Northwestern schedule for the 2020 season.

The Wildcats season opens at Big Ten foe Michigan State.  Northwestern then returns home to start a portion of their non-conference slate.  Northwestern plays host to Tulane and Central Michigan. Both teams had a winning record a season ago.  However, both teams look to be down talent wise compared to the 2019 campaign. The last non-conference game is a home meeting against Morgan State towards the end of the season.

The projected win total is 5.5.  The Wildcats should secure 3 wins in their 3 non-conference games.  Northwestern will play host to two of the lower teams in the conference from last season, in Maryland and Nebraska.  I like Northwestern to get 5 wins this season and to start the year 4-2, but then falter till a game against Morgan State.  The toss up game and probably what will lead to Northwestern winning or covering this win total will be the home game against Illinois during the last week of the season.  I think Illinois will be looking for a revenge game, after falling by 19 points to Northwestern to end the regular season a year ago.  Therefore, I will take the under on the win total. Northwestern will snag 2 additional wins from a season ago, but will fall just short of the projected win total.