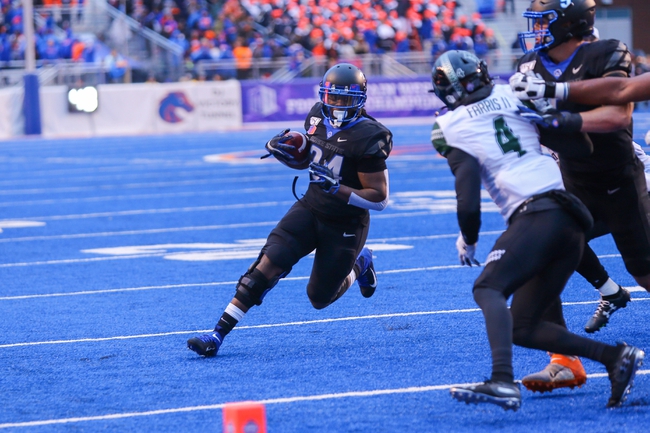 The Boise State Broncos finished the season inside the top 25, after ending the season with an overall record of (12-2).  Boise State had a fast paced offense, averaging 34.7 points per contest, which ranked 19th at the FBS level. The defense was good in their own way, allowing opponents to score an average of 21.9 per contest.  Overall the defense ranked 31st in fewest points allowed per game. Boise State is coached by Bryan Harsin. Get College Football Predictions at Pick Dawgz.

The offense will be without quarterback Jaylon Henderson this season, due to graduation.  It will be up to quarterback Hank Bachmeier. Bachmeier saw time at quarterback as a freshman, when filling in for Henderson.  Bachmeier passed for 1,879 yards, while throwing 9 touchdowns and 6 interceptions. However, the spot won’t just be handed to him, he will be competing with Chase Cord. Boise State will be able to count on their star running back from last year, as George Holani returns.  Holani rushed for 1,014 yards and 7 touchdowns. The running back also had 3 receiving touchdowns. Wideout Khalil Shakir returns for the Broncos, after hauling 63 receptions for 872 yards and 6 scores.

Defensively, Boise State returns the bulk of their defense.  However, the defense is losing defensive end Curtis Weaver. Weaver collected 13.5 sacks a junior and will be hoping to hear his name get called during the 2020 NFL draft. Riley Whimpey totaled 83 tackles, while recording 2 sacks. Defensive back Kekaula Kaniho is back, after totaling 61 tackles, 3 sacks, and having 6 passes defended as a junior. As a team the defense collected 40 sacks, while registering 10 interceptions.

Let us take a look at the Boise State schedule for the 2020 season.

The quarterback situation is a concern for Boise State, as Bachmeier showed inconsistencies a season ago.  He was also just a freshman. However, I don’t want to jump to put all the eggs in one basket here, as the offense could run into a wall in some of these games.  The projected win total is 10, Boise State would have to lose no more than 2 games to cover this. I think Boise State will still be one of the better teams in the Mountain West Conference, but I’m going to take the under in this spot.  I could see a push at best, since a 2-3 loss season for Boise State seems more likely.