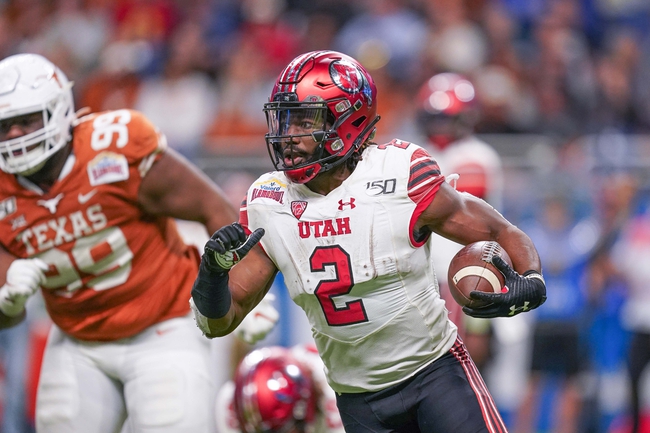 The Utah Utes are coming off an (11-3) overall record, while going (8-1) in the Pac-12.  Utah had a great season, but went into the offseason with a 2 game losing skid. Utah was out scored by Oregon and Texas by a combined score of 75-25.  Utah is under the direction of coach Kyle Whittingham. Get College Football Predictions at Pick Dawgz.

Utah will be looking to replace Tyler Huntley who graduated.  Jake Bentley and Cameron Rising look to be the front runners in this competition.  Bentley has transferred to Utah after spending his previous time at South Carolina.  The signal caller only threw 30 passes last season, but for his career has a touchdown to interception ratio of 55 to 32 interceptions.  Devin Brumfield looks to see an increase in time out of the backfield, since Zach Moss was a senior last season. Brumfield rushed for 263 yards on 59 attempts, totaling 2 touchdowns.

Tight end Brant Kuithe returns for the Utes offense.  The tight end hauled in 34 receptions for 602 yards and 6 touchdowns.  Bryan Thompson only had 18 receptions, but averaged an incredible 25.6 yards per catch.  The sophomore totaled 461 yards receiving and 3 touchdowns. The offense ranked 38th at the FBS level, averaging 32.3 points per contest.

Defensively, Utah was tough on defense.  Utah recorded the 6th best defense in fewest points allowed, giving up an average of 15.0 points per contest.  As a team, the defense registered 33 sacks and 14 interceptions. Sophomore Devin Lloyd led the team in tackles and was second in sacks.  Lloyd collected 91 tackles and 6.5 sacks. The leading sacks leader was Bradlee Anae. Anae recorded 13 sacks as a senior.

Utah opens the season with 3 straight non-conference games.  The projected win total is 3 wins then last season.  A regression in the win column would make since, as Utah lost their quarterback and running back, as well as their leading pass rusher.  Utah has 5 conference games on the road for the 2020 schedule.  However, 3 of those 5 games are against teams that had a losing record. Although, transfer quarterback Jake Bentley has shown success during his college career.  While I understand the win total projection is down after seeing how Utah ended the season and that some of the better players have graduated, there is still talent in Salt Lake City, UT. I'll go with projection in regression regarding wins, but I'll take Utah to still cover.  This team seems capable of getting 9 wins this season, when you see how the schedule is laid out, so that the worst I could see a push.  I'll put stock in the over in this win total.