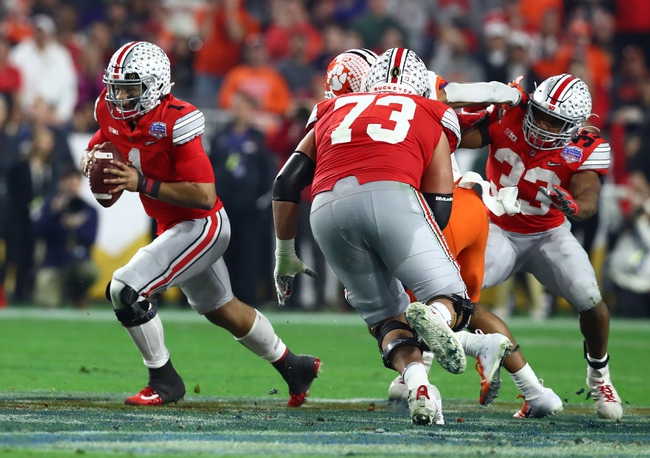 The Ohio State Buckeyes will be looking to mirror their 2019 season that saw them make it to the FBS 4 team playoff.  Ohio State finished the season (13-1), with their loan loss coming to Clemson in the playoffs, 29-23. Ohio State will absolutely look different once the 2020 campaign gets here, as the program should have a few players drafted in the first round or the first two rounds.  Three of the notable players that could or should get drafted in the first round are: Chase Young, Jeff Okudah, and J.K. Dobbins. Ohio State was led by quarterback Justin Fields last season, he returns for the 2020 campaign as a junior. Get College Football Predictions at Pick Dawgz.

Fields had a tremendous season, passing for 3,273 yards, while completing 67.2 percent of passes.  The quarterback had an incredible touchdown to interception ratio of 41 to 3. Fields also added 10 rushing touchdowns.  Master Teague III is expected to take over the starting running back opening, after rushing for 789 yards and 4 touchdowns, while playing behind Dobbins.  Teague will be a sophomore for the 2020 season, after average 5.8 yards per carry as a freshman. Chris Olave returns for a junior season, after leading Ohio State in receiving yards.  Olave hauled in 49 receptions for 849 yards and 12 touchdowns. Garrett Wilson will be entering his sophomore season, and should see an increase in playing time. Wilson had 432 yards receiving and 5 touchdowns last season, but with K.J. Hill and Binjimen Victor both being seniors last season, he should move up the depth chart.

Defensively, Ohio State allowed just 13.7 points per game, which ranked 4th at the FBS level.  Ohio State was one of the best pass rushing teams in the country, thanks to Chase Young. Ohio State totaled 54 sacks on the season, while collecting 15 interceptions.  Ohio State is sure to look a tad different, as their two best defensive players will more than likely be drafted in the top 10.

Let us take a look at the Ohio State schedule for the 2020 season.

Ohio State has their non-conference schedule at the beginning of the season, taking on Bowling Green, Oregon, and Buffalo. The Buckeyes will have a test, when they travel to Eugene, OR.  Ohio State has two tough games, at Oregon and at Penn State. I’m not saying that Ohio State doesn’t have other tough opponents, but those are at home and Ohio State will use the horseshoe to their advantage.  Coach Ryan Day should not have to pump his team up for either game. I like the chances for Ohio State to win at least one of these, as Fields returns for Ohio State, after having a dominant sophomore season. I’ll take the over, as I see Ohio State having the win total push at the worst.