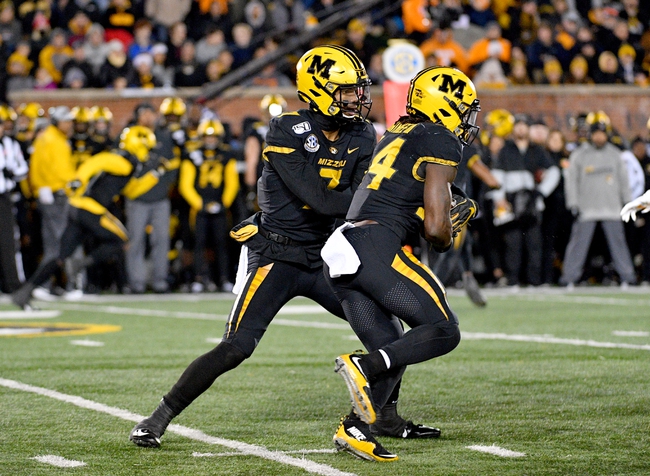 The Missouri Tigers will be trying to improve off of a 2019 campaign that saw them finish (6-6) overall and (3-5) in SEC play.  New head coach Eli Drinkwitz will be looking to turn the corner and get Missouri back on track after being ineligible for postseason play last season.  Missouri was led primarily by quarterback Kelly Bryant and running back Larry Roundtree III last season. Bryant was a senior, while Rountree was a junior.  However, the running back is expected to be drafted in one of the middle rounds of the 2020 NFL draft.  Get College Football Predictions at Pick Dawgz.

Tyler Badie rushed for 457 yards and 3 touchdowns as a sophomore for Missouri last season, while playing behind Roundtree.  Badie should see a role that has increased drastically from last season. Badie also added 4 receiving touchdowns a year ago.  Kam Scott recorded 17 receptions for 328 yards last season for Mizzou. Missouri did not have an overpowering offense, averaging just 25.3 points per contest, which ranked 93rd at the FBS level.

Defensively, Missouri was able to stay in games, thanks to their defense.  Missouri was a top 20 defense, allowing just 19.4 points per game, which ranked 16th.  The defense as a whole was not flashy in the sacks department, as the team had just 19 sacks.  Missouri had 8 interceptions through 12 games. Kobie Whiteside as a junior led the team in sacks with 7.5.

Let us take a look at the Missouri schedule for the 2020 season.

At worst Missouri should go 3-1 in non-conference games.  Missouri then has conference games at home against Vanderbilt and Arkansas.  The University of Missouri doesn’t have to face Alabama, Auburn, or LSU this season.  Missouri has a winnable schedule here to cover this 6.5 projected win total. I look for coach Eli Drinkwitz to bring his success from Appalachian State to Columbia, MO. With Missouri having 5 for sure wins, the team would need to just win 2 toss up games.  I’m going to take Missouri to cover this win total, as 7 wins seems very possible.