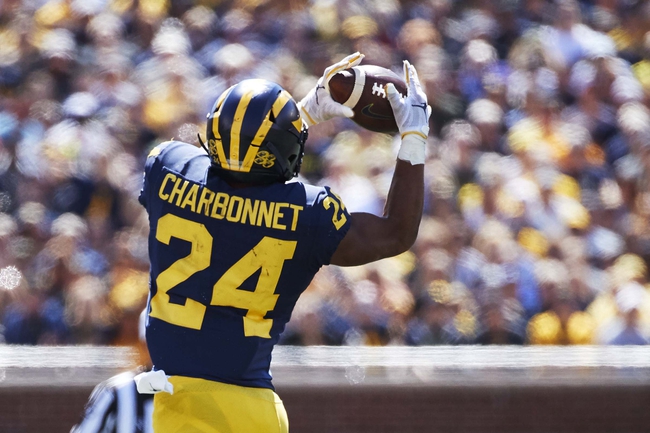 The Michigan Wolverines will be looking to build off of their 2019 season.  Michigan finished with a record of (9-4) overall and a (6-3) record in Big Ten play.  Michigan fell in the Citrus Bowl to Alabama last season, 35-16. Coach Jim Harbaugh will be looking to hopefully leapfrog Ohio State and Penn State in the East division. Get College Football Predictions at Pick Dawgz.

The Michigan quarterback position is pretty open right now, as Dylan McCaffrey and Joe Milton are set to battle for the starting job.  The offense was led by Shea Patterson last season, but due to his graduation, the two quarterbacks are set to compete for the opening. McCaffrey threw for 116 yards and 1 touchdowns, while Milton tossed a touchdown and totaled 59 yards passing.  Luckily, running back Zach Charbonnet saw plenty of time as a freshman last season. Charbonnet rushed for 726 yards and 11 touchdowns, averaging 4.9 yards per carry. Hassan Haskins rushed for 622 yards and 4 touchdowns as a sophomore.

Ronnie Bell paced the receivers a year ago, reeling in 48 receptions for 758 yards and a score.  Nico Collins added 7 touchdowns and 729 yards receiving as a junior. The offense totaled 31.7 points per contest, which ranked 44th at the FBS level.

Defensively, the defense was top 25 in fewest points allowed.  Michigan allowed 20.7 points per game. The team registered 37 sacks and 9 interceptions, while recovering 11 fumbles. Defensive tackle Kwity Paye is back for his senior season, after collecting 6.5 sacks and 50 tackles a season ago.  Aidan Hutchinson contributed 68 tackles and 4.5 sacks last year. Ambry Thomas had 3 interceptions and 38 tackles for Michigan a year ago. Thomas will be a key piece in the secondary during the 2020 campaign.

Let us take a look at the 2020 schedule for Michigan.

Michigan will be playing their non-conference games up front and open the season at Washington.  After the game against Washington, the Wolverines play four straight home games. The first game of the season will be an intriguing one, as both teams will be starting their season with a fresh quarterback from last season. Michigan has a couple toss up games this season and those are: at Washington, at Michigan State, at Minnesota, vs Penn State. Assuming Michigan would win all their home games besides Penn State, that would give Michigan 6 wins. Michigan should win at Rutgers, while I wouldn’t say the same for their road game at Ohio State.

In my mind Michigan has 7 wins, with 4 toss up games.  Without knowing how the quarterback situation will unfold, I’ll give Michigan 2 wins out of those 4 games. In order to cover this win total projection of 9, Michigan would have to go at least 3-1 in those games.  I’m going to take the under here, with a push seeming more realistic.