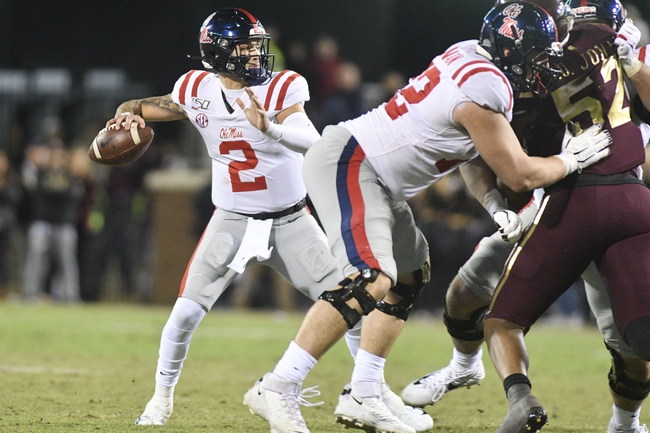 The Ole Miss Rebels struggled last season, winning just 4 games.  The Rebels finished (4-8) overall, but just (2-6) in SEC play. The Rebels were winless on the road last season and had an 0-4 record against the AP top 25.  Get College Football Predictions at Pick Dawgz.

The Rebels had two quarterbacks split time last season, with Matt Corral and John Rhys Plumlee.  Corral was more of a passing quarterback out of the two and passed for 1,362 yards, while throwing 6 touchdowns and 3 interceptions.  Plumlee threw for 910 yards and 4 touchdowns, while throwing 3 picks. Plumlee was a dual threat last season, as the quarterback rushed for 1,023 yards and 12 touchdowns.  Jerrion Ealy led the backfield with 722 rushing yards, while crossing the goal line 6 times. As a team, Ole Miss totaled 29 rushing scores.

Elijha Moore was the leading receiver, having totaled 67 receptions and 850 yards, while scoring 6 touchdowns.  Ealy was the next closest in receptions with 20. The good news for the Rebels this season, Corral, Plumlee, and Ealy were all freshmen that gained valuable experience.  Moore was a sophomore, so the Rebels playmakers were rather young, which should have helped prepare the squad for the 2020 campaign.

Defensively, the Rebels as a team collected 33 sacks and 10 interceptions.  Lakia Henry led the Rebels in tackles last season with 87. Sam Williams led the team in sacks with 6 last season.  The rebels allowed an average of 26.5 points per contest, which ranked 95th out of 130 at the FBS ranks.

Let’s take a look and see who the Rebels will be playing this season.

Ole Miss will have for sure wins against SEMO, Georgia Southern, and UConn.  That leaves Ole Miss needing just 3 wins in conference play to cover the win total.  There are some winnable games on their schedule during conference play. However I see Ole Miss getting off to a rough start, as the Rebels play Baylor, Auburn, LSU, and Alabama in their first 5 games.  The Rebels get off to a rough start, but will cover the win total. The youth getting experience last season, will go a long way for this 2020 campaign.