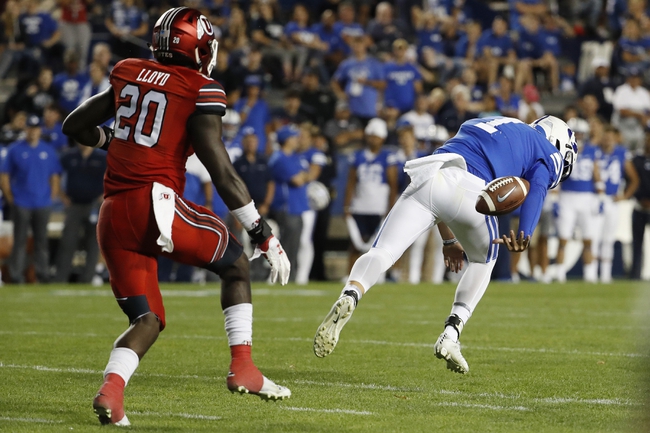 Where to Watch: TBA Stream live sports and exclusive originals on ESPN+. Sign up now!

The BYU Cougars need a victory here to set the tone of the season considering they’ve won a combined 18 games the last three years, which is a major step backwards from where Bronco Mendenhall left the program. The good news is BYU has its experienced quarterback in Zach Wilson, who has had his moments the last two years, and he has his top receiving target in tight end Matt Bushman as well as running back Lopini Katoa. There’s no excuse for BYU not to be a decent offensive bunch with a lot of returning production. Defensively, the BYU Cougars return their star linebacker in Kavika Fonua and linebacker Payton Wilgar, who led BYU with three interceptions as a freshman. BYU is a bit young on the defensive side this season and growing pains could take place, but the Cougars have to hit the ground running if this season is going to be an upgrade from past years.

The Utah Utes won 11 games last year and have a chance to win double-digit games back-to-back years for the first time since 2009-10. Utah will have to find a new quarterback, who will likely be Jason Shelley, who has 187 pass attempts for his career. There will be weapons to ease the transition with Brant Kuithe, Bryan Thompson and Jaylen Dixon returning, a trio that combined for 13 receiving touchdowns last season. The Utah Utes were carried a lot last season by one of the best defenses in the country, and while a lot of that production is gone, leading tackler Devin Lloyd does return at the linebacker position. Mika Tafua has come along as a reelable defensive lineman and the return of safety R.J. Hubert will be key for the secondary. Kyle Whittingham has his work cut out for him this season, but he’s one of the top coaches in the country and he should figure it out.

The BYU Cougars have been average at best these last few years and have been beaten up by the Utes in previous meetings, but they're a tough team that usually bullies in the trenches and has a lot of returning production. I love the way Whittingham runs his program and there's no doubt Utah will be a factor in the Pac-12 yet again, but the Utes return just 37 percent of last years prediction, which is dead last in college football. Utah isn't the same team it was last season and it's going to take time to get things rolling again. I want the points with the BYU Cougars, a game they'll have a chance to win outright against a Utah team that has so many new faces.