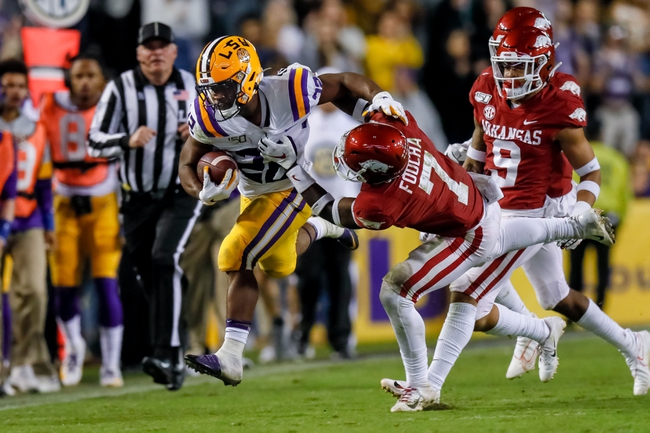 The Arkansas Razorbacks will be looking to improve off of a 2019 season that saw the program finish with a record of (2-10), while going (0-8) in SEC play.  Arkansas struggled to score at a consistent rate, averaging just 21.4 points per contest. The defense was even worse, allowing an average of 36.8 per game. The defense had the 6th worst points allowed average per game.  The program is under the direction of Sam Pittman, who will be in his first season at Arkansas.

The offense was led by quarterback Nick Starkel last season.  Starkel saw the most playing time under center out of five quarterbacks.  Starkel passed for 1,152 yards, while throwing for 7 touchdowns and 10 interceptions.  Jack Lindsey looks to compete for more playing time this season, after playing in two games a season ago, throwing for 126 yards, 3 touchdowns, and no interceptions.  Running back Rakeem Boyd rushed for 1,133 yards and 8 touchdowns. In what was a rather disappointing season for the Arkansas offense, Boyd brought a bright spot. He averaged over 6 yards per rush attempt.  Mike Woods added 33 receptions and 423 yards receiving as a sophomore.

As a team, the defense totaled 21 sacks and 6 interceptions.  Linebacker Bumper Pool is the leading returner in tackles, having had 94 tackles a season ago.  The defensive line will have to overcome their top 2 pass rushers from a season ago. McTelvin Agim had 5 sacks, whie Jamario Bell had 4.5 sacks, both were seniors last season. Kamren Curl was the only defensive back to have multiple interceptions.  Curl was a junior during the 2019 campaign.

Let us take a look at the Arkansas schedule for the 2020 season.

The Razorbacks open the season at home against Kent State in a non-conference tilt.  The rest of the Arkansas non-conference schedule is: at Notre Dame, Charleston Southern, and Louisiana Monroe. Arkansas has a brutal SEC schedule this season, with home games against both Alabama and LSU.  Arkansas will have to go on the road to Auburn and Mississippi State. Arkansas only faces one team at home that had a losing record a season ago out of conference opponents. Ole Miss is the only team Arkansas will face that had near a record of Arkansas.  However, Ole Miss should be better this season.

The win total projection is 3.5 for Sam Pittman’s first season.  It will take Pittman some time to gain Arkansas some traction. Arkansas lost 2 non-conference games last season to San Jose State and Western Kentucky.  This season the Razorbacks have 3 possible wins.  Arkansas should have wins over Kent State, Charleston Southern and Louisiana Monroe.  I don’t think Arkansas gets a win in conference play, but look for Arkansas to be more competitive in games this season. I’ll take the under, as 3 wins seems appropriate for Arkansas.