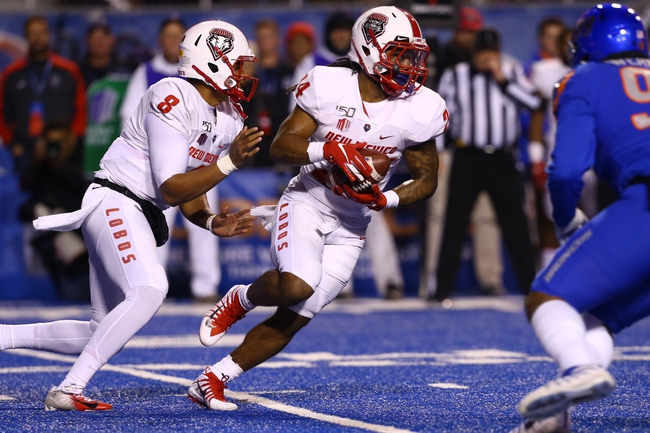 The New Mexico Lobos will be looking for different results for the 2020 season, compared to the results during the 2019 campaign.  New Mexico finished with a record of (2-10), while going winless in Mountain West play (0-8). The offense struggled to get much going last season, averaging 22.6 points per game.  The defense was even worse, allowing opponents to average 37.2 points per contest, which ranked 125th at the FBS level. The program will be under the direction of Danny Gonzales for the 2020 season.  Gonzales was the defensive coordinator at Arizona State for the last 2 seasons. Get College Football Predictions at Pick Dawgz.

The offense had problems at the quarterback spot last season, as the coaching staff went through what seemed to be the whole depth chart.  The program saw injuries and a suspension out of the quarterbacks. There 4 different quarterbacks used last season, with Trae Hall looking like the quarterback to be lined for this season.  Hall passed for 162 yards, while throwing 4 touchdowns and 2 interceptions. Hall also added 163 yards rushing and 2 touchdowns. Bobby Cole looks to have first dibs in the backfield this season, after rushing for nearly  200 yards and 2 touchdowns. Cole will look to have an increased role after Ahmari Davis rushed for 832 yards and 7 touchdowns as a senior. There were 19 different players that had a rush attempt last season for New Mexico.  Jordan Kress hauled in 28 receptions for 530 yards and 6 touchdowns, as the wideout separated himself from the pack. Kress returns, hoping to build off the 2019 season.

Defensively New Mexico recorded 22 sacks, while collecting 4 interceptions.  As a junior linebacker Jacobi Hearn led the team in sacks with 6, whie totaling 49 tackles.  The defense did lose their leading tackler in linebacker Alex Hart, who registered 82 tackles and 4 sacks.

Let us take a look at the New Mexico schedule for the 2020 season.

The Lobos open the season with a rare 5 straight non-conference slate of games.  New Mexico opens the season against FCS foe Idaho State. Idaho State had just 3 wins last season. New Mexico then hits the road for two road games against Mississippi State and USC. New Mexico should be 1-2 heading into a road game against New Mexico State, who last year was just 2-10. The Lobos then play host to UMass who was just 1-11 a year ago.  Between 3 teams in the non-conference slate, the teams totaled a combined record of 6-30.

The projected win total is 3.5. A 3-2 record in non-conference play is very possible, but after that, wins may be out of the question.  Only 2 teams on the New Mexico schedule had a losing record out of the 8 conference opponents. I’ll look for New Mexico to get an additional win then last season, but ultimately fall short of the win total.  It will take head coach Danny Gonzales some time to turn this program around.