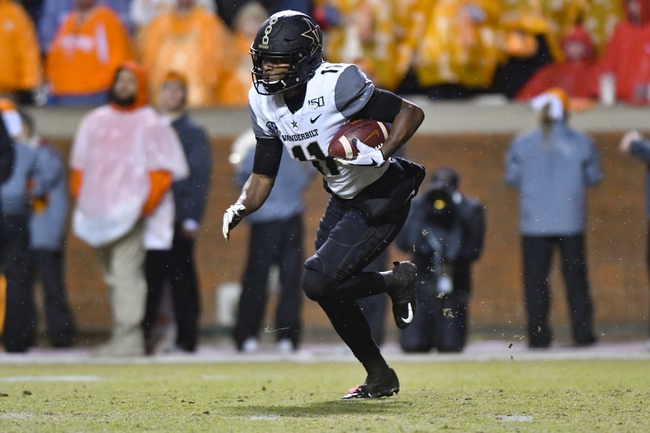 The Vanderbilt Commodores will be heading into the 2020 campaign, hoping to improve on their 2019 season.  Vanderbilt finished the 2019 season with a record of (3-9). Vanderbilt saw their 3 wins happen at home against: Northern Illinois, Missouri, and East Tennessee State.  The offense averaged just 16.5 points per game, which ranked 125th at the FBS level. The defense was abysmal, allowing 31.8 points per game. Vanderbilt ranked 95th in points allowed on defense. Get College Football Predictions at Pick Dawgz.

Quarterback Riley Neal is gone, after throwing for 1,585 yards and 9 touchdowns on the season.  There are three new quarterbacks on the roster for the 2020 season. Running back Ke’Shawn Vaughn was a senior last season, after rushing for 1,028 yards and 9 touchdowns.  Keyon Brooks returns as a sophomore, after rushing for 252 yards on 52 attempts and 1 touchdown. Cam Johnson leads the returning wideouts in yardage from a season ago, after contributing 316 yards on 30 receptions and 3 touchdowns.

Defensively, the secondary struggled to intercept opposing quarterbacks, finishing the season with just 6.  The defense collected 20 sacks on the season. Dimitri Moore led Vanderbilt with 99 tackles as a sophomore. Andre Mintze collected 4.5 sacks as a junior, which led the Commodores on defense.  Safety Tae Daley collected half the team's interceptions as a junior, while also adding 57 tackles.

Let us take a look at the Vanderbilt schedule for the 2020 season.

Looking at the Vanderbilt schedule, the Commodores open the season against Mercer.  Vanderbilt will play 3 of their 4 non-conference games at home, with the loan road game at Kansas State.  Vanderbilt also plays Colorado State and Louisiana Tech at home, besides Mercer. Vanderbilt has a great chance to go 0-5 in road games this season, with 4 of those being in SEC play.

This projected win total is at 3 and seeing how the schedule will unfold, I’m going to take the under.  Vanderbilt at best will win 2 non-conference games, with losses to Kansas State and Louisiana Tech. I’m not confident that Vanderbilt will win an SEC game.  However, the possibility is there, so I’ll still take the under, as a push would negate the play. With the offense having new quarterbacks on the roster and a 1,000 yard rusher gone, I’m not confident in a team that won just 3 games a season ago. Take the under in this projected win total.