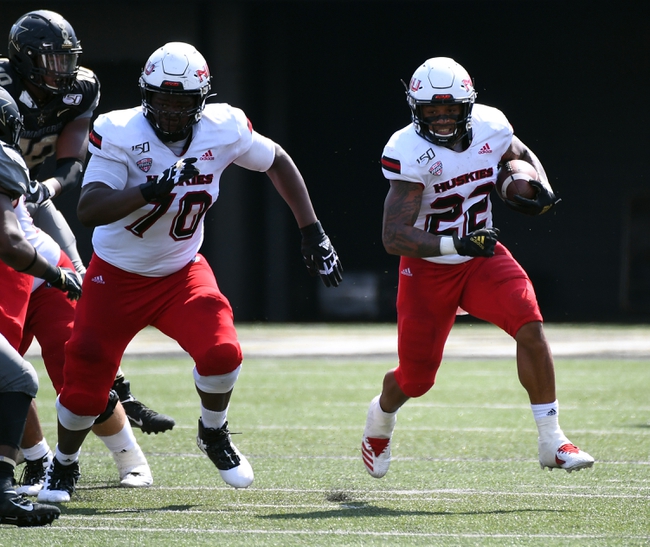 The Northern Illinois Huskies are trying to improve off of their 2019 season that saw a record of (5-7) and (4-4) in MAC play. Northern Illinois split their last 8 games of the season, but a 4 game losing streak towards the beginning of the season hurt the team's record.  The offense struggled on the season, averaging just 22.8 per game, which ranked 103rd out of 130 teams at the FBS level. The defense was better, ranking 71st, allowing 28.2 per contest. Northern Illinois is under the direction of Thomas Hammock.  Get College Football Predictions at Pick Dawgz.

Marcus Childers returns for his senior season at quarterback.  The quarterback had a shortened junior season, but managed to pass for 474 yards, 6 touchdowns, and 3 interceptions. Childers also added 366 yards rushing and 5 touchdowns. Running back Tre Harbison will be back in the backfield, after rushing for over 1,000 yards in back to back seasons.  Harbison rushed for 1,021 yards and 8 touchdowns during the 2019 season. Cole Tucker leads the returning wideouts from last season, after hauling in 38 receptions for 531 yards and a score. Tight End Mitchell Brinkman is back for a senior season, after contributing 445 yards receiving on 34 receptions and 3 touchdowns.

Defensively, Northern Illinois registered 14 sacks and 4 interceptions as a team during the 2019 campaign.  Linebacker Vinny Labus is the leading returner in tackles, after recording 59 during the 2019 season. Labus also added 2 sacks. Defensive tackle Jack Heflin led the defense in sacks with 3.  Cornerback Jalen McKie is back for a junior season, McKie only had 1 interceptions, but did have 10 passes defended.

Let us take a look at the Northern Illinois schedule for the 2020 season.

The Huskies non-conference schedule has the likes of Rhode Island, Maryland, Iowa, and BYU.  Rhode Island is an FCS program out of the Colonial Athletic Association. Northern Illinois hit a 4 game losing streak during a time where Childers was out of the lineup.  The Northern Illinois offense returns all of their core players. The defense also returns their leader in sacks and McKie in the secondary. This projected win total is 5, which is what the Huskies win total was last season.  I’m going to side with the over here, as Northern Illinois should be well improved from a season ago, as the offense should be drastically better with a lot of returning starters.