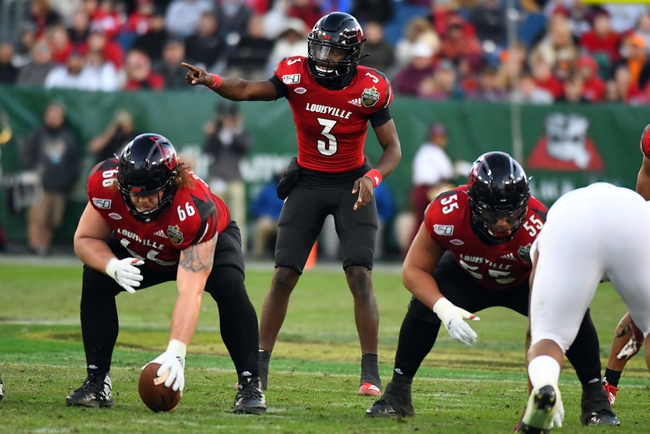 The Louisville Cardinals finished in 2nd place in the Atlantic side of the ACC standings.  Louisville finished the 2019 season with an (8-5) record overall, while going (5-3) in ACC play.  The offense averaged 33.1 points per contest, which ranked 31st at the FBS level. The defense gave up an average of 33.4 points per game, which ranked 109th. Louisville is led by head coach Scott Satterfield. Get College Football Predictions at Pick Dawgz.

Micale Cunningham led the charge at quarterback, passing for 2,065 yards, while having a touchdown to interception ratio of 22 to 5.  The quarterback contributed 6 rushing touchdowns and nearly 500 yards rushing. Cunningham was just a sophomore, so the quarterback will be back under center for the 2020 season.  Javian Hawkins rushed for 1,525 yards as a freshman, while adding 9 touchdowns. TuTu Atwell enters his junior season, after hauling in 70 receptions for 1,276 yards and 12 touchdowns. Moral of the offense, the core players will be returning for the 2020 campaign.

Defensively the team registered 27 sacks, while picking off opposing quarterbacks 7 times.  The leading tackler for Louisville last season will return for his senior season. Linebacker C.J. Avery led Louisville with 93 tackles.  Avery also added 3 sacks. The defense also returns their sack leader from a season ago. Monte Montgomery was just a sophomore, but recorded 5 sacks to lead the team, while adding 3 forced fumbles. There was not a player on defense that had more than 1 interception. Chandler Jones did lead the team with 10 passes defended as a sophomore.

Let us take a look at the Louisville schedule for the 2020 season.

The Cardinals non-conference schedule will feature Murray State, Western Kentucky,Notre Dame, and Kentucky.  The only road game out of the 3 is the Notre Dame game. The schedule places Louisville on their home turf for 7 of the 12 games.  Louisville has a chance to start the season with a 5-1 record, with the loan loss being at Clemson. Louisville faces two non-conference opponents at home, while facing 3 ACC teams that finished the 2019 season with a below .500 record.  Louisville also faces Wake Forest this season, a team that will have a new quarterback under center.

Louisville returns their quarterback, running back, and star wideout.  Louisville should be able to keep pace with their offensive average of points per game from last season.  The projected win total is 6.5. I think Louisville should be able to cover this win total, as the program doesn’t have an overly too tough of a schedule for the first half of the season.  If the defense can improve a little, a better record then last season is not out of the question.