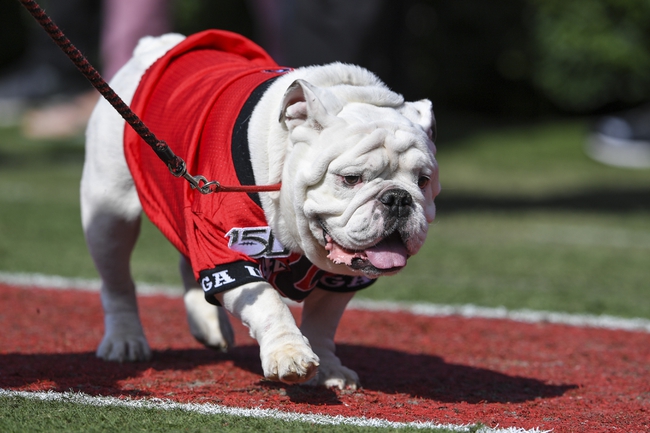 The Georgia Bulldogs will be heading into the 2020 season, hoping to mirror their 2019 campaign.  Georgia finished the 2019 season with a record of (12-2), while finishing SEC play with a record of (7-1). Georgia made it to the AllState Sugar Bowl and knocked off Baylor, 26-14. Georgia was towards the middle of the pack, finishing the 2019 season 50th in points forwarded, averaging 30.8 per contest.  However, the defense was number 1 in the country, allowing just 12.6 per game.  Get College Football Predictions at Pick Dawgz.

The offense was led by quarterback Jake Fromm last season, who passed for over 2,800 yards, while throwing 24 touchdowns and just 5 interceptions.  The quarterback will be forgoing his senior season and will be entering the 2020 NFL draft. However, Georgia landed Wake Forest Grad transfer Jamie Newman.  Newman passed for 2,868 yards, 26 touchdowns, and 11 interceptions. Running back D’Andre Swift had a good season for the Bulldogs a season ago, but like Fromm, Swift is expected to be a draft pick in one of the first few rounds.  Zamir White is the most experienced returning running back. White rushed for 408 yards and 3 touchdowns, while averaging 5.2 yards per rush.

White did not see a lot of playing time, but fans should not be worried.  Georgia is consistently producing running backs for the next level. There are a few currently in the NFL: Todd Gurley, Nick Chubb, Sony Michel. With Swift declaring, he would mark the 4th running back in as many years.  Wideout George Pickens burst onto the scene as a freshman last season, posting 49 receptions, 727 yards, and 8 touchdowns. Dominick Blaylock added 5 touchdowns as a freshman a season ago.

Defensively, the defense totaled 31 sacks, while intercepting opposing quarterbacks 8 times.  The defense was led by Monty Rice, who will return for his senior season. Rice collected 89 tackles, which led the team. Linebacker Azeez Ojulari led the defense in sacks as a freshman a season ago.  The linebacker recorded 5.5 sacks, while collecting 36 tackles. Defensive back Richard LeCounte will also return for his senior season. The defensive back registered 4 of the team’s 8 interceptions, while also accumulating 61 tackles.

Let us take a look at the Georgia schedule for the 2020 season.

Georgia should not lose a beat on offense with Newman leading the team.  The Bulldogs should be just as dominant as last season and should go 4-0 in non-conference play, with all 3 games being at home and 1 at a neutral site.  Georgia will be the team to beat again in the East side of the SEC. Georgia has to play at Alabama this season, while playing host to Auburn.  Georgia should be just as good as last season and the only real threat Georgia has this season is Alabama. Georgia only has 3 road games outside of Alabama: Missouri, South Carolina, and Kentucky. Even though Georgia lost to South Carolina a year ago, look for a redemption game here.  I’m going to side with the over here, as Georgia should have a real chance to get to the 4 team playoffs for the 2020 season.