The Wake Forest Demon and Wisconsin Badgers face off on Wednesday or the Deacons Dukes Mayo Bowl at Bank Of America Stadium.

The Wake Forest Demon Deacons had some opt-outs before the start of the season but they were still able to manage a 4-4 record during the regular season. Coming into this game Wake Forest has lost two games in a row including their last game against Louisville, a game they gave up 45 points in and that led to the loss. Wake Forest comes into this game averaging 37 points per game while their defense is giving up 31.6 points per game. Wake Forest is a pass first team that averages 265.8 yards per game through the air. Quarterback Sam Hartmann has been under center for Wake Forest and he has thrown for 1906 yards, 10 touchdowns, and one interception. In this game if Wake Forest wants to win the offense is going to need to have success. And trying to establish the run early could be a key.

On the other side of this matchup is the Wisconsin Badgers who have to be very disappointed with how they have played so far this year. They only sit with a 3-3 record overall, but they were able to defeat the Minnesota Gophers in the last game. Even though Wisconsin won that game, the offense didn’t look great, and they are going to need better offensive production in this game. Under center for Wisconsin will be Graham Mertz who comes into this one having throw for 1,108 yards, eight touchdowns, and five interceptions. In the last game against Minnesota he only threw for 132 points and he needs to be better throwing the ball.

The over is 11-5 in Wake Forest’s last 16 non-conference games.Wisconsin is 10-4 against the spread in their last 14 games on grass.

Wisconsin’s offense didn’t impress me in the last game, and in this one I think there will be some struggles. Look for Wake Forest to find enough offense to keep this game close, and they might even do enough to pull off the upset. Back Wake Forest against the spread. 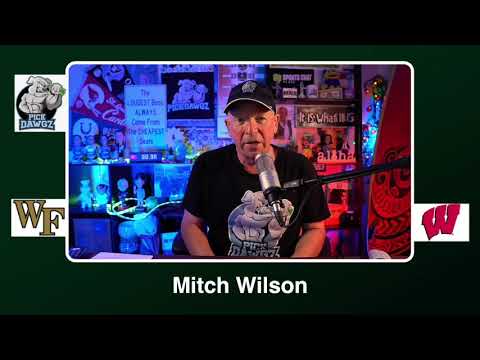