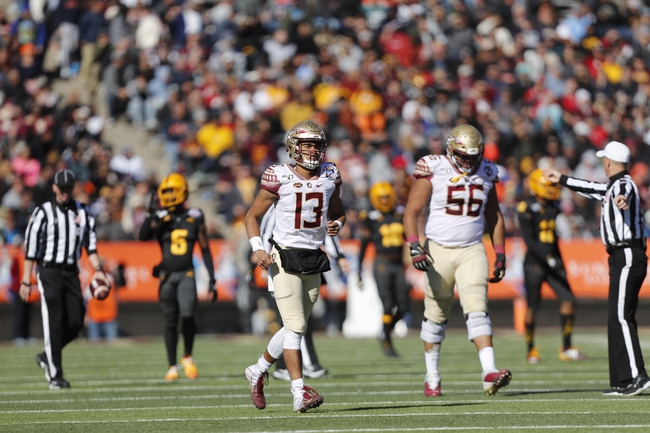 The Florida State Seminoles will travel to Truist Field to take on the Wake Forest Demon Deacons this Saturday afternoon in College Football action.

The Florida State Seminoles snapped a 3-game losing streak and improved to 3-6 on the season after defeating the Duke Blue Devils, 56-35, this past Saturday. Florida State had one of their better offensive games of the season and pulled away from the Blue Devils after 14 unanswered points gave the Seminoles a 42-21 lead with 7:34 left in regulation. Florida State outgained Duke by a 522-393 margin and won the turnover battle by a 4-2 margin in the victory. Leading the way for the Seminoles was QB Jordan Travis who completed 13 of 18 passes for 192 yards, 2 TD, & 1 INT while also adding 90 rushing yards for 1 TD.

The Wake Forest Demon Deacons lost their 2nd straight game and dropped to 4-4 on the season after being defeated by the Louisville Cardinals, 45-21, this past Saturday. Wake Forest held a 7-0 after the first quarter, however, the defense struggled the rest of the way and could not fight back after 21 unanswered points by the Cardinals gave Louisville a 28-10 lead with 8:03 left in the 3rd quarter. Wake Forest was outgained by a Louisville by a 453-351 margin and lost the turnover battle by a 2-0 margin. Leading the way for the Demon Deacons was WR Jaquarii Roberson who had 9 receptions for 138 yards & 1 TD.

Wake Forest has been a solid team at home and has an offense that can put up points, however, I do think the lost of Kenneth Walker III hurts them. Florida State has had a season to forget, however, the offense has shown some signs of life as of late and should be able to have some success against a Demon Deacons defense that ranked just 108th in total defense. I think this has the making of a high-scoring game, however, as I think Florida State will be able to keep this one somewhat close, I think the play here is to take the Seminoles and the points. Good Luck!