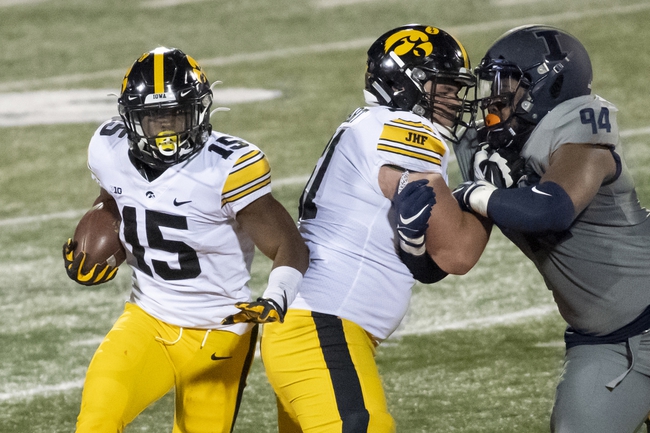 The Michigan Wolverines will travel to Kinnick Stadium to take on the 16th ranked Iowa Hawkeyes this Saturday night in College Football action.

The Michigan Wolverines have had their last two games cancelled due to Covid-19 and come into this game with an overall record of 2-4 on the season after being defeated by the Penn State Nittany Lions, 27-17, on November 28th. The Michigan offense couldn’t get anything going at home against the previous winless Nittany Lions and could not fight back after a Will Levis 2-yard TD run gave Penn State a double-digit lead with 8:12 left in regulation. Michigan was outgained Penn State by a 417-286 margin and lost the turnover battle by a 1-0 margin in the loss. Leading the way for the Wolverines was RB Hassan Haskins who had 101 rushing yards & 2 TD’s on 17 carries.

The 16th ranked Iowa Hawkeyes won their 6th straight game and improved to 6-2 on the season after defeating the Wisconsin Badgers, 28-7, this past Saturday. Iowa had no trouble shutting down the struggling Wisconsin offense and pulled away after taking a 21-7 lead with 1:23 left in regulation. Iowa outgained Wisconsin by a 338-225 margin while winning the turnover battle by a 2-1 margin in the victory. Leading the way for the Hawkeyes was WR Ihmir Smith-Marsette who had 7 receptions for 140 yards & 2 TD’s.

Michigan has been one of the biggest disappointments in College Football this season, especially on the defensive end where they rank just 97th in scoring defense. Iowa has been on a roll and between the fact that they have one of the best defenses in the country and have certainly enough offensive weapons to put up some points in this one, I’m taking Iowa to cover this large home spread. Good Luck!