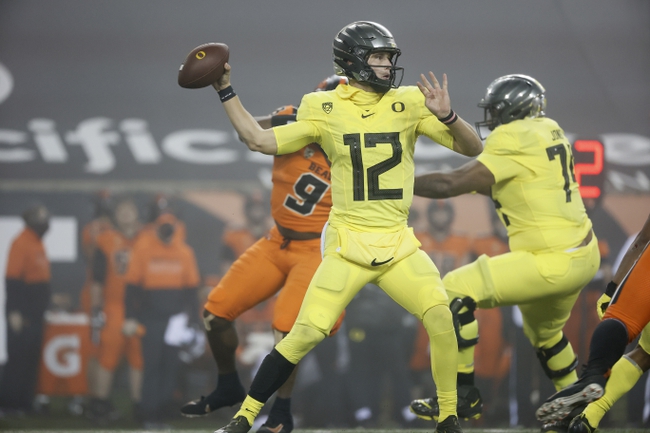 The 22nd ranked Washington Huskies will travel to Autzen Stadium to take on the 23rd ranked Oregon Ducks this Saturday in College Football action.

The 22nd ranked Washington Huskies dropped to 3-1 on the season after being defeated by the Stanford Cardinal, 31-26, this past Saturday. Washington struggled offensively early and could not fight all the way back after going into halftime trailing by a 24-3 margin. Washington was outgained by Stanford by a 443-371 yards and forced 1 turnover in the loss. Leading the way for the Huskies was RB Sean McGrew who had 65 rushing yards & 2 TD’s on 16 carries.

The 23rd ranked Oregon Ducks lost their 2nd straight game and dropped to 3-2 on the season after being defeated by the California Golden Bears, 21-17, this past Saturday. Oregon fought back from an early 14-3 deficit to take a 17-14 lead at halftime, however, the Ducks offense stalled out in the 2nd half and could not fight back after a 28-yard TD pass by the Golden Bears Chase Garbers gave California the lead for good with 5:14 left in the 3rd quarter. Oregon was outgained California by a 368-271 margin, however, committed 2 turnovers in the loss. Leading the way for the Ducks was QB Tyler Shough who completed 14 of 26 passes for 231 yards & 1 TD while also adding 53 rushing yards.

Washington picked up some nice wins earlier this season against Oregon State & Utah, however, suffered a disappointing loss against Stanford last week in which their defense let them down early. Oregon has disappointed on the road the last two weeks, however, they are 2-0 at home this season and between the fact that this is Washington’s first road game and that I think the Ducks will be able to find success offensively against Washington’s defense, I’m taking Oregon to cover this mid-range home spread. Good Luck!