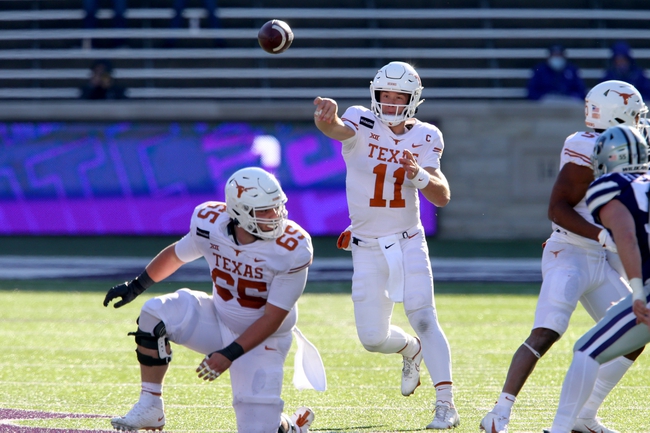 The Texas Longhorns and Kansas Jayhawks face off on Saturday in a college football showdown at KU Memorial Stadium.

Texas has a lot of questions hanging over their head right now including who will be their coach next season. There have been a lot of rumors about Urban Meyer but that isn’t something this team can focus on as they try to win another game. Texas still has six wins this season but that isn’t enough for a program like the Longhorns. Texas had their last game against Kansas State and it was the offense that was the difference as they put up 69 points in a blowout victory. On the season Texas is averaging 41.3 points per game. Quarterback Sam Ehlinger is having a really big game for the team throwing for 2406 yards, 25 touchdowns, and five interceptions.

On the other side of this matchup is the Kansas Jayhawks who still haven’t won a game yet this year, but they were at least competitive in the last game. Against Texas Tech the defense stepped up in a big giving up only 16 points. The only problem for Kansas was their offense only could manage 13 points. On the season Kansas is averaging 15.8 points per game while their defense is giving up 46 points per game. Jalon Daniels and Miles Kendrick could boht play under center for this team, but with the way Kendrick looked against Texas Tech, it wouldn't be shocking to see him get another shot in this game to try and keep it close.

These are two teams who have issues covering spreads, but there just isn’t a way I see Kansas keeping it close. Kansas looked better in the last game, but they still couldn't score. Texas is going to want to put on a show in this one and they aren’t going to be afraid to run up the score in this one.