The Hawai’i Rainbow Warriors will travel to CEFCU Stadium to take on the San Jose State Spartans this Saturday afternoon in College Football action.

The Hawai’i Rainbow Warriors snapped their 2-game losing streak and improved to 3-3 (3-3 Mountain West) on the season after defeating the Nevada Wolf Pack, 24-21, this past Saturday. Hawai’i was able to get out to a 17-7 halftime lead and was able to hold on late after a 2-yard TD run by Chevan Cordeiro gave the Rainbow Warriors a 10-point lead with 9:31 left in regulation. Hawai’i was outgained by Nevada by a 376-365 margin, however, didn’t commit a turnover in the victory. Leading the way for the Rainbow Warriors was QB Chevan Cordeiro who completed 26 of 32 passes for 246 yards & 1 TD while also rushing for 62 yards & 1 TD.

The San Jose State Spartans has had their last two games cancelled due to Covid-19 and come into this game with an overall record of 4-0 (4-0 Mountain West) after defeating the UNLV Rebels, 34-17, on November 14th. San Jose State was outstanding on both ends of the ball against the Rebels and had no trouble securing the victory after taking a 31-17 lead late in the 3rd quarter. San Jose State outgained UNLV by a 457-294 margin in the victory. Leading the way for the Spartans was QB Nick Starkel who completed 17 of 8 passes for 274 yards, 2 TD, & 1 INT.

Hawai’i is a decent team, however, San Jose State is team to beat in the Mountain West in my opinion as the Spartans can both score the ball and have an incredible defense that ranks t-6th in scoring defense. I expected this line to be in the double-digits and as it’s only a TD, I think San Jose State will have no trouble covering. Good Luck! 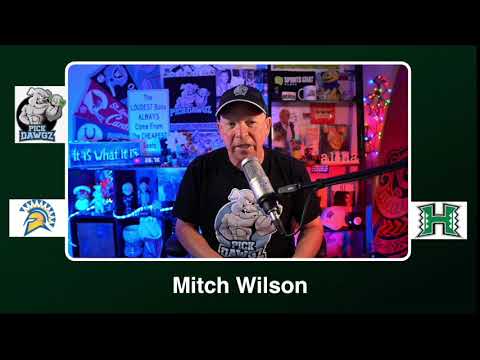