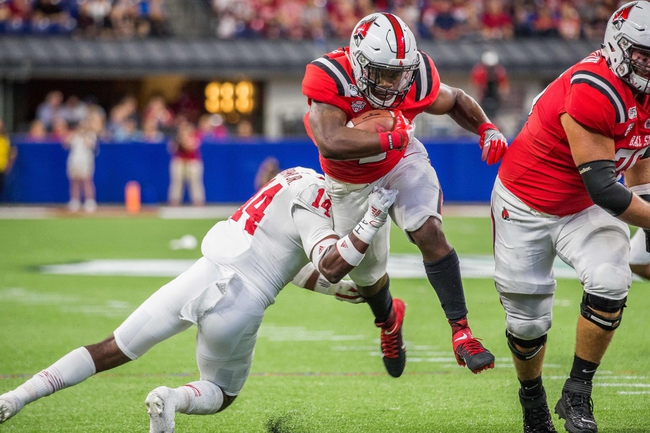 The Ball State Cardinals will travel to Kelly/Shorts Stadium to take on the Central Michigan Chippewas this Saturday in College Football action.

The Ball State Cardinals won their 3rd straight game and improved to 3-1 (3-1 MAC West) on the season after defeating the Toledo Rockets, 27-24, this past Saturday. Ball State got some big defense plays late and was able to hold on for the victory after having a 27-9 lead early in the 4th quarter. Ball State was outgained by Toledo by a 449-447 margin, however, did force two Toledo turnovers in the victory. Leading the way for the Cardinals was QB Drew Plitt who completed 26 of 35 passes for 304 yards, 2 TD, & 1 INT.

The Central Michigan Chippewas improved to 3-1 (3-1 MAC West) on the season after defeating the Eastern Michigan Eagles, 31-23, this past Friday. Central Michigan looked like they were in trouble after the Eagles too a 23-14 lead with just 8:59 left in regulation, however, the Chippewas were great offensively down the stretch and was able to get the come from behind victory after scoring the final 17 points of the game. Central Michigan outgained Eastern Michigan by a 553-439 margin and forced 5 Eagles turnovers in the victory. Leading the way for the Chippewas was RB Lew Nichols III who had 196 rushing yards & 2 TD’s on 29 carries.

These are two pretty even teams, however, I think I have to give the edge to Ball State here. Central Michigan relies heavily on their rushing attack and although they have had success this season, I think they could run into some trouble against a Ball State run defense that ranks 33rd in College Football. Ball State has more of a balanced attack on offense as they have had success as of late ATS in this series, I’m taking Ball State and the points. Good Luck!