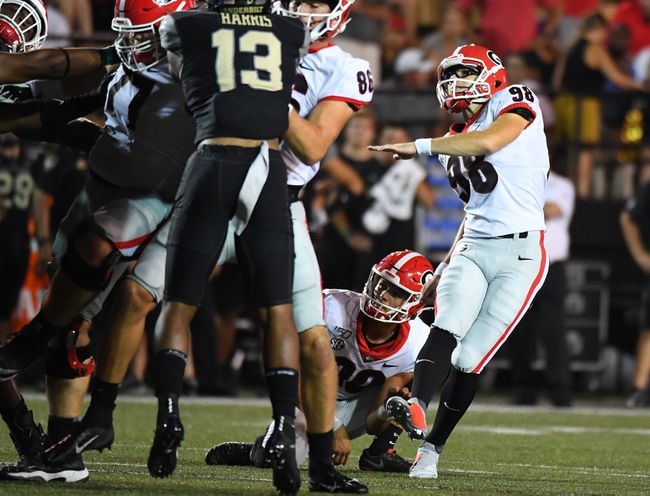 Vanderbilt is coming off a 41-0 loss to Missouri on the road. Vanderbilt made history in its loss by having the first female play for a Power 5 team, as Sarah Fuller played as the placekicker for the Commodores. Vanderbilt is now 0-8 on the year, as it has been another miserable season for Vandy in the SEC. News broke earlier today that the head coach of Vanderbilt, Derek Mason, was fired. Vanderbilt will now have to travel to Athens with a hole at head coach and nothing to play for but an upset. Vanderbilt scores 14.3 points per game and earns 333.4 total yards per contest as well. Vanderbilt allows 36.8 points per game, as both the offense and defense have struggled badly all season long. Vanderbilt will look to end this season as soon as possible, as it has been an ugly one.

Georgia is coming off a 45-16 over its big-time rival in South Carolina in Week 13 on the road. Georgia is now 6-2 on the year and sits at #9 in the AP polls. Georgia's two losses this season came against Alabama and Florida, two top-ten teams in the nation. Since the Florida loss, Georgia has won two straight games and will look to make it three at home against the worst team in the SEC. Georgia scores 31.3 points per game and earns 397.1 total yards of offense per contest. Georgia allows 20.6 points per game and allows 338.1 total yards of offense per contest to its opposition. Georgia does not have a chance to make the college football playoff, but this team could still find its way into a New Years Six Bowl for sure.

Georgia opens as a 33.5-point favorite and the total is set at 53.5. Georgia is going to win this game rather easily, but I do not know if I can lay 33.5 points. I think the strongest play is on the under here, as I do not think Vanderbilt will score in this game.