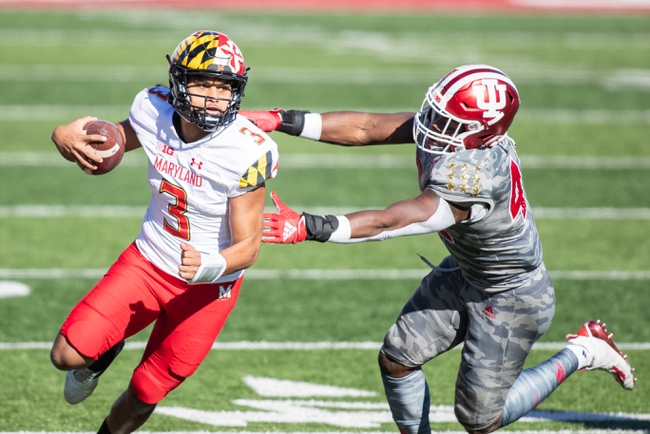 The Maryland Terrapins will travel to Michigan Stadium to take on the Michigan Wolverines this Saturday afternoon in College Football action.

The Maryland Terrapins had their 2-game winning streak snapped and dropped to 2-2 (2-2 Big 10) on the season after being defeated by the 12th ranked Indiana Hoosiers, 27-11, this past Saturday. Maryland had trouble getting the offensive going on the road against the Indiana defense and couldn’t fight back after a Stevie Scott III 2-yard TD run for the Hoosiers gave Indiana a 27-3 lead with just 8:22 left in the 4th quarter. Maryland was outgained by a 349-300 margin and lost the turnover battle by a 3-1 margin in the loss. Leading the way for the Terrapins was Dontay Demus Jr. who had 6 receptions for 114 yards & 1 TD.

The Michigan Wolverines dropped to 2-4 (2-4 Big 10) on the season after being defeated by the Penn State Nittany Lions, 27-17, this past Saturday. The Michigan offense couldn’t get anything going at home against the previous winless Nittany Lions and could not fight back after a Will Levis 2-yard TD run gave Penn State a double-digit lead with 8:12 left in regulation. Michigan was outgained Penn State by a 417-286 margin and lost the turnover battle by a 1-0 margin in the loss. Leading the way for the Wolverines was RB Hassan Haskins who had 101 rushing yards & 2 TD’s on 17 carries.

Maryland is young, but they have a bunch of offensive weapons led by both Taulia Tagovailoa and Dontay Demus Jr. which have shown against inferior defenses, that they can put up points. Michigan has been one of the most disappointing teams in College Football this season and as their defense had been terrible, ranking 97th in scoring defense, I think Maryland has a good chance to win this game outright and at worse, cover with the points. Good Luck!