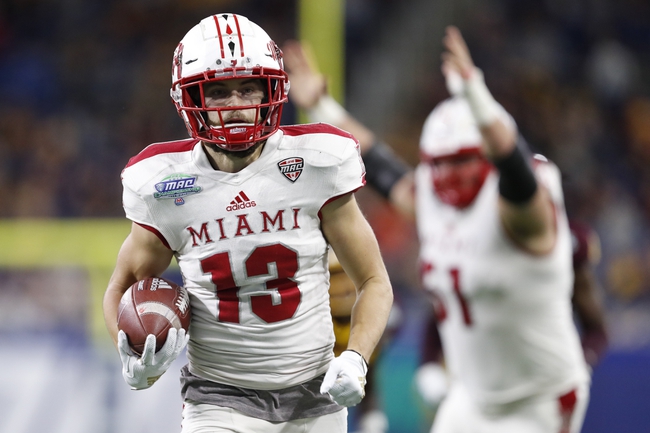 The Kent State Golden Flashes will travel to Yager Stadium to take on the Miami (OH) RedHawks this Saturday afternoon in College Football action.

The Kent State Golden Flashes lost their first game of the season and dropped to 3-1 (3-1 MAC East) on the season after being defeated by the Buffalo Bulls, 70-41, this past Saturday. Kent State had no answers for the Bulls Jaret Patterson who tied a College Football record with 8 rushing TD’s and couldn’t fight back after Buffalo took a 56-31 lead early in the 4th quarter. Kent State was outgained by Buffalo by a 663-578 margin and lost the turnover battle by a 1-0 margin in the loss. Leading the way for the Golden Flashes was QB Dustin Crum who completed 22 of 32 passes for 343 yards, 3 TD, & 1 INT.

The Miami (OH) RedHawks improved to 2-1 (2-1 MAC East) on the season after defeating the Akron Zips, 38-7, this past Saturday. Miami (OH) was lights out defensively against the Zips and had no trouble securing the victory after going into halftime with a 24-0 lead. Miami (OH) outgained Akron by a 416-145 margin and won the turnover battle by a 1-0 margin in the victory. Leading the way for the RedHawks was WR Jack Sorenson who had 8 receptions for 177 yards & 4 TD’s.

Kent State has been a fun team to watch with as their last three games have had totals that have averaged 100.3 points, however, when looking at this team, I can’t say that I’m that impressed with their 3-1 record as those three wins have come against team (EMU, Bowling Green, Akron) that have a combined 0-12 record. Miami (OH) picked up a nice win at home against Ball State to start the season and as I think their offense at home will have no trouble putting up points, I’m taking the RedHawks at home with the points. Good Luck!