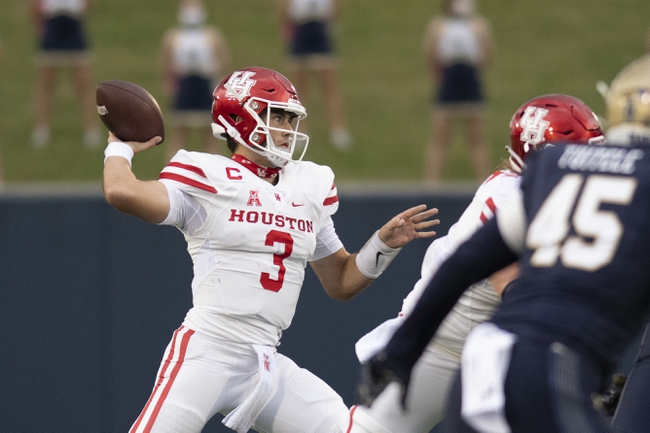 This game has been postponed.

The 24th ranked Tulsa Golden Hurricane will travel to TDECU Stadium to take on the Houston Cougars this Saturday afternoon in College Football action.

The 24th ranked Tulsa Golden Hurricane won their 5th straight game and improved to 5-1 (5-0 AAC) on the season after defeating the Tulane Green Wave, 30-24 2OT, this past Thursday. In one of the most exciting games of the week, Tulsa was able to force OT on a hail mary pass and then sealed the victory after a pick-six in double-OT. Tulsa outgained Tulane by a 522-302 margin, however, did commit three turnovers in the victory. Leading the way for the Golden Hurricane was QB Davis Brin who completed 18 of 28 passes for 266 yards & 2 TD.

The Houston Cougars had their game last week against SMU postponed due to Covid-19 and come into this game with an overall record of 3-3 (3-2 AAC) on the season after defeating the South Florida Bulls, 56-21, on November 14th. Houston had its way on offensively against the Bulls and had no trouble securing the victory after taking a 35-0 lead on a 72-yard punt return TD by Marcus Jones early in the 3rd quarter. Houston outgained USF by a 505-359 margin and won the turnover battle by a 2-1 margin in the victory. Leading the way for the Cougars was QB Clayton Tune who completed 14 of 25 passes for 165 yards, 3 TD, & 1 INT while also adding 120 yards & 2 TD’s on the ground.

Tulsa is a great defensive football team, however, Houston is a team that certainly can put up points and I am not sure I like backing a Golden Hurricane offense without Zane Smith behind center. As good as the Golden Hurricane defense is, this is still the same team that struggled slowing East Carolina a few weeks ago and as I think Houston offense has finally found its rhythm, I think the play here is to take Houston to cover this small home spread. Good Luck!