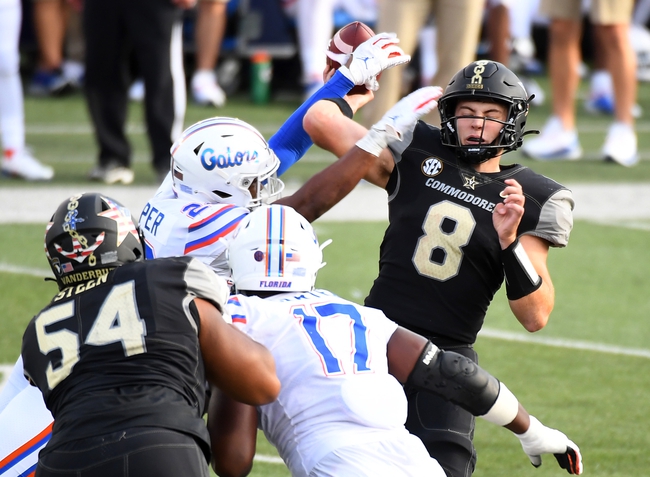 Where to Watch: SECALT Stream live sports and exclusive originals on ESPN+. Sign up now!

This game has been postponed.

The Tennessee Volunteers and Vanderbilt Commodores face off on Saturday in a college football showdown at Vanderbilt Stadium.

Tennessee won their first two games of the season against South Carolina and Missouri but coming into this game they have lost five games in a row. In each of their last five games they have also failed to cover the spread. In the last game against Auburn they got out to a fast start, but they couldn’t keep the success up and that led to a 13 point loss. Each of their last four games they have also failed to get past 17 points. Tennessee has stuck with quarterback Jarrett Guarantano and at this point it’s probably time to make a change. On the season, Guarantano has thrown for 1,112 yards, six touchdowns, and four interceptions. This is a real chance for Tennessee to win a game and if they were to lose this game, there would be even more grumblings from the fans.’

On the other side of this matchup is the Vanderbilt Commodores who haven’t won a game yet this season, but they have covered the spread in each of the last three games. In the last game they lost 38-17, but they were 31.5 point underdogs to Florida which means they covered the spread. The defense hasn’t been good for this team, but the biggest issue for the squad has been with the offense that is averaging 16.6 points per game.At quarterback, Vanderbilt is led by Ken Seals who has thrown for 1,610 yards, 10 touchdowns, and nine interceptions. In this game the defense needs to make life tough on the Tennessee offense. If they were able to create a couple of turnovers early, that would help take some of the pressure and give the offense short fields.

The under is 7-1 in Tennessee’s last eight games as a favorite. Vanderbilt is 3-9 against the spread in their last 12 home games. The under is 11-5 in Vanderbilt's last 16 games overall. The under is 10-4 in the last 14 meetings played between the two teams.

Vanderbilt’s offense isn’t great and there is no reason to believe it’s going to be any different in this game. Look for Vanderbilt to struggle to score but they will also slow down the pace which is going to keep this total low. Back the under.