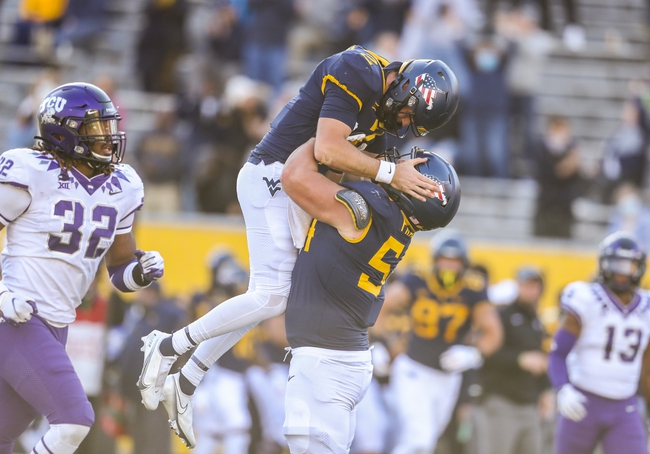 The 14th ranked Oklahoma Sooners will travel to Mountaineer Field at Milan Puskar Stadium to take on the West Virginia Mountaineers this Saturday night in College Football action.

The 14th ranked Oklahoma Sooners won their 5th straight game and improved to 6-2 (5-2 Big 12) on the season after defeating the 14th ranked Oklahoma State Cowboys, 41-13, this past Saturday. As impressive as the Oklahoma offense was against a tough Oklahoma State defense, Oklahoma got the biggest performance of the season from their defense and had no trouble picking up the victory after taking a 27-7 lead midway through the 2nd quarter. Oklahoma outgained Oklahoma State by a 492-246 margin and won the turnover battle by a 1-0 margin in the victory. Leading the way for the Sooners was QB Spencer Rattler who completed 17 of 24 passes for 301 yards & 4 TD’s.

The West Virginia Mountaineers improved to 5-3 (4-3 Big 12) on the season after defeating the TCU Horned Frogs, 24-6, on November 14th. West Virginia was once again outstanding defensively and had no trouble picking up win after going into halftime with a 14-3 lead. West Virginia outgained TCU by a 392-295 margin and won the turnover battle by a 2-0 margin in the victory. Leading the way for the Mountaineers was RB Leddie Brown who had 156 rushing yards on 24 carries.

Oklahoma has looked great over the last month, but this is going to be a tough game for the Sooners as West Virginia has arguably the best defense in the Big 12 and should be able to slow down the Oklahoma passing attack with their top rated pass defense. West Virginia has a balanced offense attack which I think will be able to put up some points at home and as I expect this line to even get better as the week goes on with the public probably siding with the Sooners, I’m going to take West Virginia and the under as I expect this be a close game with not as much scoring as people will expect. Good Luck!