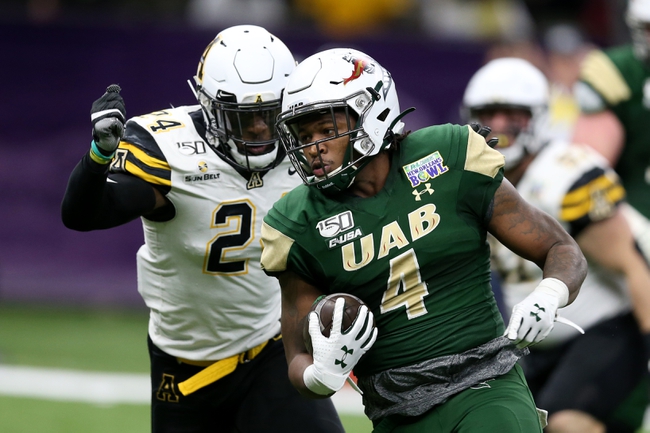 The Southern Mississippi Golden Eagles will travel to Legion Field (AL) to take on the UAB Blazers this Friday afternoon in College Football action.

The Southern Mississippi Golden Eagles lost their 2nd straight game and dropped to 2-7 (1-4 C-USA) on the season after being defeated by the UTSA Roadrunners, 23-20, this past Saturday. Southern Mississippi fought back from a 23-10 2nd half defeicit to make it game late, however, the defense could not get a key stop late and allowed the Roadrunners to run out the final 4:36 of the game for the victory. Southern Mississippi outgained UTSA by a 347-304 margin and committed 1 turnover in the loss. Leading the way for the Golden Eagles was QB Tate Whatley who completed 22 of 39 passes for 272 yards, 2 TD, & 1 INT.

The UAB Blazers have had their last two games cancelled due to Covid-19 and come into this game with an overall record of 4-3 (2-1 C-USA) after dropping a 37-34 in 2OT battle against Louisiana Tech on October 31st. UAB looked like they had the game under control after holding a 31-17 lead entering the 4th quarter, however, allowed the Bulldogs to fight back to force OT and then fumbled to start off the 2nd OT which allowed Louisiana Tech to kick a 35-yard game-winning FG. UAB outgained Louisiana Tech by a 485-381 margin, however, lost the turnover battle by a 3-1 margin in the loss. Leading the way for the Blazers was RB Spencer Brown who had 140 yards & 2 TD’s on 29 carries.

UAB comes into this game riding a 2-game losing streak, however, there is no question that the Blazers are the far better team in this one. Southern Mississippi is averaging just 14.3 ppg over their last four games and between the fact that I think the Golden Eagles will struggle offensively and that the UAB rushing attack won’t have an issue finding the end zone, I’m taking UAB to cover this large home spread. Good Luck!