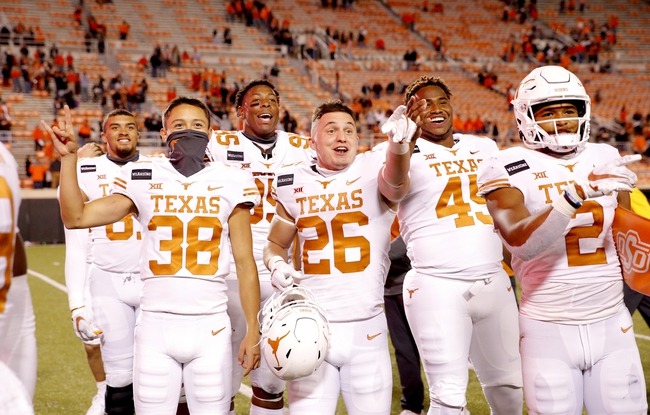 Photo by The Oklahoman-USA TODAY Sports

The Texas Longhorns and Kansas Jayhawks face off on Saturday in a college football showdown at KU Memorial Stadium.

There are some grumblings about what the Texas Longhorns might do with their coaching staff after the season but right now they sit with a 5-2 record and they have won each of their last three games. This is a strong offensive team for most of the season, but in the last game against West Virginia, it was the defense that only gave up 13 points and that led to a victory. On the season, Texas is averaging 40.4 points per game while giving up 29.7 points per game. Quarterback Sam Ehlinger has thrown for 1834 yards, 22 touchdowns, and five interceptions. Each of his last two games he hasn’t thrown an interception and taking care of the ball will be important in this game.

On the other side of this matchup is the Kansas Jayhawks who look like the worst team in the FBS and they still haven’t won a game so far this season. This is an offense that struggles to score points, and their defense has been lit up most of the season. In the last game against Oklahoma they scored nine points while giving up 62 and that led to the loss. On the season, Kansas is averaging only 15.1 points while giving up 48.4 points per game. Kansas is big underdogs in this game, but if they want to come away a victory, it’s going to take a near perfect game that starts with the defense finding a way to slow down Texas.

Kansas has struggled to keep games close this season and there is no reason to believe it’s going to be any different in this game. Texas is going to run up the score, Kansas is going to have no answer, and the Longhorns will win this game and cover the spread.