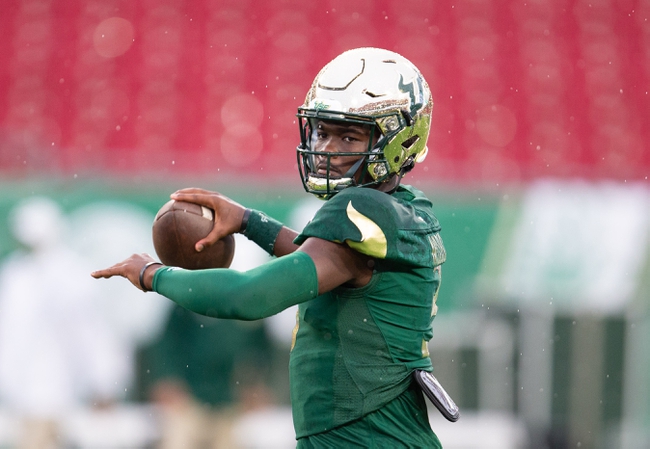 The Navy Midshipmen will travel to Raymond James Stadium to take on the South Florida Bulls this Saturday night in College Football action.

The Navy Midshipmen have had their last two games (Tulsa, Memphis) postponed due to COVID-19 and come into this game with an overall record of 3-4 (3-2 AAC) after losing to the SMU Mustangs, 51-37, on October 31st. Navy had no answers on the defensive end for the potent SMU offensive attack and could not fight back after SMU took a 45-17 lead on a 20-yard TD reception by Rashee Rice with 5:17 left in the 3rd quarter. Navy was outgained by SMU by a 555-430 margin and committed one turnover in the loss. Leading the way for the Midshipmen was QB Tyger Goslin who completed 6 of 10 passes for 123 yards & 2 TD.

The South Florida Bulls lost their 7th straight game and dropped to 1-7 (0-6 AAC) on the season after being defeated by the Houston Cougars, 56-21, this past Saturday. South Florida had no answers defensively for the Cougars early in this one and could not fight back after trailing by a 42-0 margin midway through the 2nd quarter. South Florida was outgained by Houston by a 505-359 margin and lost the turnover battle by a 2-1 margin in the loss. Leading the way for the Bulls was QB Jordan McCloud who completed 14 of 29 passes for 180 yards & 1 TD.

Navy has had a tough season as the Midshipmen have really struggled slowing down opposing offenses as they come into this game ranked 108th in scoring defense and 119th in rushing defense. South Florida has also had a tough season defensively, however, between the fact that the South Florida offense looked better over the past four weeks and that Navy hasn’t played over the past two weeks, I’m going to take the Bulls and the points in this one. Good Luck!