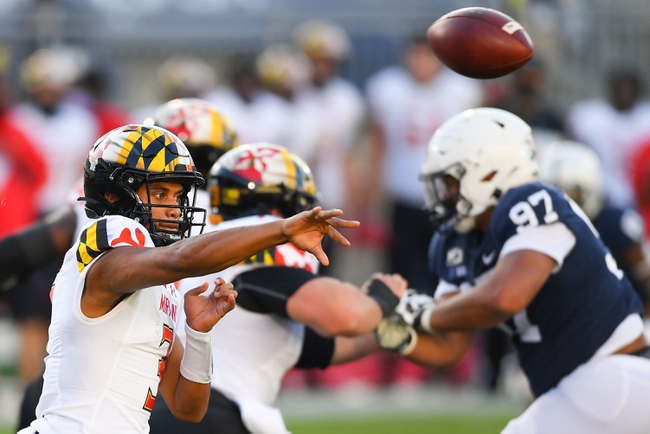 The Michigan State Spartans will travel to Capital One Field at Maryland Stadium to take on the Maryland Terrapins this Saturday in College Football action.

The Michigan State Spartans dropped to 1-3 (1-3 Big Ten) on the season after being defeated by the 10th ranked Indiana Hoosiers, 24-0, this past Saturday. Michigan State has no answers on the offensive end against Indiana and could not fight back after the Hoosiers took a 14-0 halftime lead. Michigan State was outgained by Indiana by a 433-191 margin and lost the turnover battle by a 4-2 margin in the loss. Leading the way for the Spartans was Jayden Reed who had 7 receptions for 63 yards.

The Maryland Terrapins has their game last week against Ohio State cancelled due to Covid-19 and come into this game with an overall record of 2-1 (2-1 Big Ten) after defeating the Penn State Nittany Lions, 35-19, on November 7th. Maryland had no trouble generating offense early against Penn State and cruised to victory in the 2nd half after taking a 35-7 lead early in the 3rd quarter. Maryland was outgained by Penn State by a 434-405 margin, however, did win the turnover battle by a 3-0 margin in the victory. Leading the way for the Terrapins was QB Taulia Tagovailoa who completed 18 of 26 passes for 282 yards & 3 TD.

It was hard to get a read on Michigan State early in the season after losing their season opener to Rutgers but following that lose with a big win at Michigan, but after seeing a few more games, it’s clear that Michigan State is not a very good football team. Maryland can give up some points on defense, but the offense has looked outstanding in their last two games and as I think Taulia Tagovailoa and the Terrapins offense will continue to roll in this one, I’m taking Maryland to cover this spread. Good Luck!