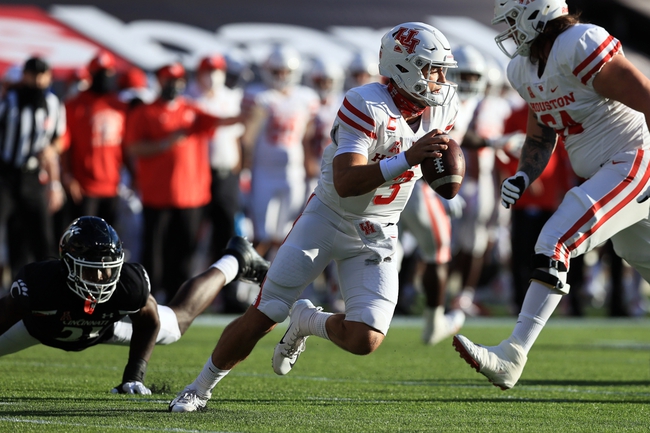 The Houston Cougars will travel to Gerald J. Ford to take on the SMU Mustangs this Saturday afternoon in College Football action.

The Houston Cougars snapped a 2-game losing streak and improved to 3-3 (3-2 AAC) on the season after defeating the South Florida Bulls, 56-21, this past Saturday. Houston had its way on offensively against the Bulls and had no trouble securing the victory after taking a 35-0 lead on a 72-yard punt return TD by Marcus Jones early in the 3rd quarter. Houston outgained USF by a 505-359 margin and won the turnover battle by a 2-1 margin in the victory. Leading the way for the Cougars was QB Clayton Tune who completed 14 of 25 passes for 165 yards, 3 TD, & 1 INT while also adding 120 yards & 2 TD’s on the ground.

The SMU Mustangs had their 2-game winning streak snapped and dropped to 7-2 (4-2 AAC) on the season after being defeated by the Tulsa Golden Hurricane, 28-24, this past Saturday. SMU looked like they had the game under control heading into halftime leading by a 24-7 margin, however, the Mustangs offense couldn’t find the scoreboard in the 2nd half and allowed Tulsa to pull off the come from behind victory with 14 unanswered points in the 4th quarter. SMU was outgained by a 455-351 margin in the loss. Leading the way for the Mustangs was QB Shane Buechele who completed 18 of 36 passes for 200 yards, 1 TD, and 1 INT.

Both of these offenses can certainly light up the scoreboard, however, I do think SMU is a bit overrated and was somewhat exposed with their poor performance in the 2nd half agianst Tulsa. Houston is better than their record indicates as they had a tough schedule to start the season with games agianst BYU, UCF, and Cincinnati and as I think their offense will be able to put a similar performance against the SMU defense as we just saw agianst USF, I’m taking Houston on the M/L. Good Luck.