The Buffalo Bulls and Bowling Green Falcons face off on Tuesday in a college football showdown at Doyt Perry Stadium.

Coming into the season Buffalo looked like the class of the MAC conference and after two games, that still appears to be the case. Buffalo has run up the score in each of the first two games and it has led to back to back victories. Buffalo is averaging 45.5 points per game and it’s been a balanced attack that has led to the success. Quarterback Kyle Vantrease has thrown for 531 yards, five touchdowns, and one interception.Running back Jaret Patterson has also rushed for 210 yards and four touchdowns. On defense, Buffalo did show some holes in the first game of the year against Northern Illinois giving up 30 points and they need to be better on that side of the ball in this one.

On the other side of this matchup is the Bowling Green Falcons who have lost each of their last first two games, and neither of the games was particularly close. In the first game of the season, Bowling Green was blown out by Toledo and in the last game they lost to Kent State 62-24. There is no doubt the defense is a big issue, but the offense needs to be better if they want any chance to keep this game close. In the last game it was the running game that led to some offensive success. Terion Stewart had a big game, having 14 attempts for 162 yards and two touchdowns. Bowling Green is led at quarterback by Matt McDonald who has thrown for 233 yards, two interceptions, and zero touchdowns.

Buffalo is an elite offensive team, but I think Bowling Green will struggle to score and that will keep this game low scoring. Back the under to cash. 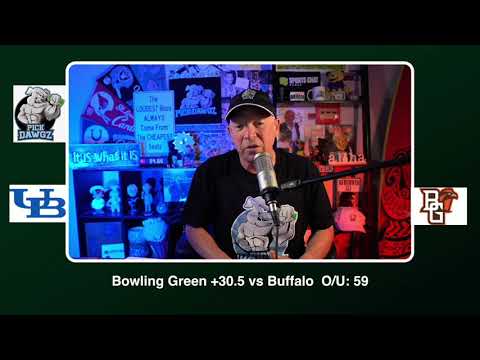