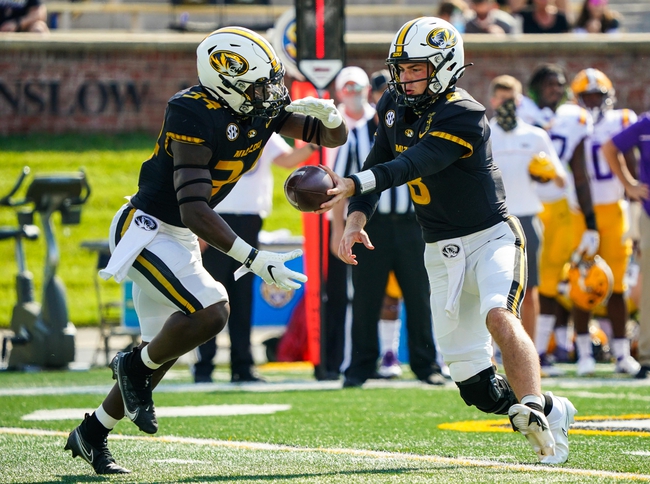 This Game Has Been Postponed. The 12th ranked Georgia Bulldogs will travel to Memorial Stadium/Faurot Field to take on the Missouri Tigers this Saturday afternoon in College Football action.

The 12th ranked Georgia Bulldogs dropped to 4-2 (4-2 SEC) on the season after being defeated by the 8th ranked Florida Gators, 44-28, this past Saturday. Georgia started well out of the gates, taking a quick 14-0 lead in the 1st quarter, however, the Bulldogs defense had a tough time slowing down the Gators offense the rest of the way and couldn’t fight back after Florida went into halftime with a 38-21 lead. Georgia was outgained by Florida by a 571-277 margin and lost the turnover battle by a 3-1 margin in the loss. Leading the way for the Bulldogs was RB Zamir White who had 107 rushing yards and a TD on 7 carries.

The Missouri Tigers dropped to 2-3 (2-3 SEC) on the season after being defeated by the 10th ranked Florida Gators on October 31st. Missouri had no answers on either side of the football against the Gators and couldn’t fight back after a 2-yard TD reception by Justin Shorter gave the Gators a 37-7 lead late in the 3rd quarter. Missouri was outgained by Florida by a 514-248 margin and committed two turnovers in the loss. Leading the way for the Tigers was RB Larry Rountree III who had 36 rushing yards & 1 TD on 14 carries while also hauling in 26 receiving yards on 6 receptions.

It is going to be interesting to see how Georgia comes out for this game after coming off their worst defensive performance of the season and a 2nd loss that has most likely knocked the Bulldogs out of the College Playoff picture. Georgia has really struggled offensively this season at times and could be even in more trouble with two of their main weapons in Bennett & Pickens questionable. Missouri has been a bit inconsistent this season, however, between the fact Missouri has been very good at home this season and that I think the Tigers offense will be able to put up some points in this one, I think the play here is to take the Tigers and the points. Good Luck!