The Miami Hurricanes and Virginia Tech Hokies face off on Saturday in a college football showdown at Lane Stadium.

Miami has found a whole lot of success this season and their only loss this season came against the Clemson Tigers. Even with all the success, Miami has failed to cover the spread in each of the last two games including the last game against NC State, a game they only won by three as 10.5 point favorites. Miami’s offense has been good this season averaging 34.4 points per game. Quarterback D’Eriq King has led the way throwing for 1828 yards, 16 touchdowns, and four interceptions. This is a defense that prides itself on defense but at times this season they have struggled and on the season they are averaging 24.9 points per game. In this game if the defense is strong, Miami should be in really good shape to come away with the victory.

On the other side of this matchup is the Virginia Tech Hokies who have a 4-3 record but they are coming off a loss against a shocking loss against Liberty. Liberty has been one of the best mid-major teams in the country, but they really had no business even keeping it close against Virginia Tech. On the season the Hokies are averaging 37.3 points per game but their defense is giving up 31.6 points per game and the defense needs to be so much better in this game. At quarterback, Virginia Tech is led by Hendon Hooker who has thrown for 870 yards, seven touchdowns, and three interceptions. Look for the Hokies offense to lean on the running game in this one.

Virginia Tech is coming off a loss and I think Miami is going to step up to the plate in this one. Look for Miami to run up the score, VT won’t keep up, and the visiting team will cover the spread. 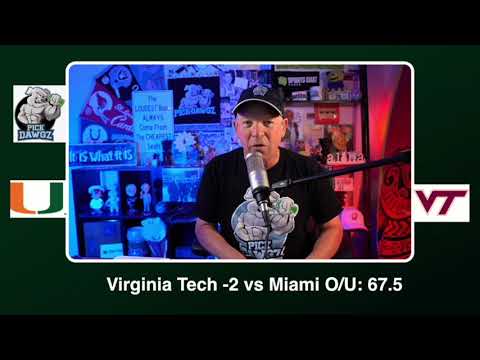