FAU is coming off a 10-6 win over Western Kentucky in Week 10 of the season. It was not the prettiest of wins for Florida Atlantic, but the Owls got the job done nonetheless. FAU is now 3-1 on the year and FAU has won back-to-back games inside the Conference-USA conference as well. FAU prides itself on its defense, as the team has allowed single digits to its opposition (UTSA and Western Kentucky) in its last two games. FAU on the season is averaging 11.5 points allowed per game, which is incredible for a team that has already played four games. FAU only scores 16.0 points per game this season, as the offense has been a bit of an afterthought for FAU. FAU did not do much on offense against Western Kentucky, which is definitely alarming when you take a look at how bad Western Kentucky has been on defense this season. FAU will have to find a more balanced attack against its conference rival or else the game could be as ugly as the Western Kentucky contest.

FIU is in the midst of a rebuilding year, which is very clear to see. FIU is off to a terrible 0-3 start which includes a bad loss to FCS Jacksonville State. Jacksonville State is no slouch, but any loss to any FCS team has to be a disappointment for FIU. FIU has been extremely inconsistent on both sides of the ball. FIU has scored 24.0 points per game and has earned 262.7 total yards of offense per game as well. FIU has allowed 28.7 points per game to its opposition and has conceded 458.3 total yards of offense to opposing teams as well.

I am going to take the under here, as I think this is "a first team to 20 wins" type of game. Both offenses have not impressed, and I think this could be a very boring game on Friday night. "Boring" and "under" go hand-in-hand. 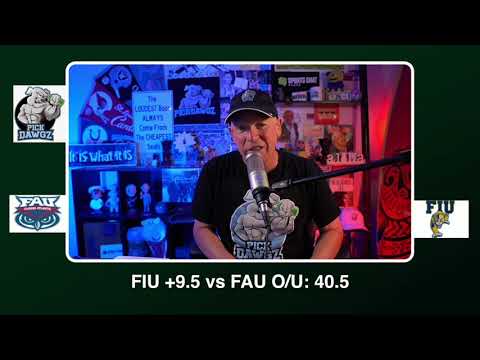