The Miami of Ohio Redhawks and Buffalo Bulls face off on Tuesday in a MAC college football showdown at UB Stadium.

The Miami of Ohio Redhawks seemed to be a wild card coming into the season but they do currently sit with a 1-0 record. The Redhawks fell behind early in that game but as the game went on, the offense got better and 14 points in the 4th quarter was enough to come away with a 38-31 victory. At quarterback Miami is led by AJ Mayer and in the first game of the season he threw for 212 yards and three touchdowns. Running back Zach Kahn also had a big game rushing for 42 yards and two touchdowns. On defense there are some real questions for Miami of Ohio and in this game the job isn’t going to get any easier in this game. If the defense struggles in this game, Miami is going to have a hard time coming away with a victory.

On the other side of this matchup is the Buffalo Bulls who almost blew a cover in their first game of the season but they held onto it late. In terms of the victory though there really was no doubt as they won 49-30 against the Northern Illinois Huskies. The star of the show for the Bulls offense is running back Jaret Patterson who had 20 carries for 137 yards and two touchdowns in the first game of the season. Quarterback Kyle Vantrease had a couple of questionable throws but he still finished the game throwing for 175 yards and a touchdown. On defense there was some concern coming into the season and it showed through in the first game giving up 30 points. And on the ground they really had issues slowing anything down.

Buffalo is a better offensive team and Miami of Ohio is going ot have no chance at keeping up this game. Look for Buffalo to run up the score, the Redhawks to struggle to score and that will lead to the home team winning the game and covering the spread. 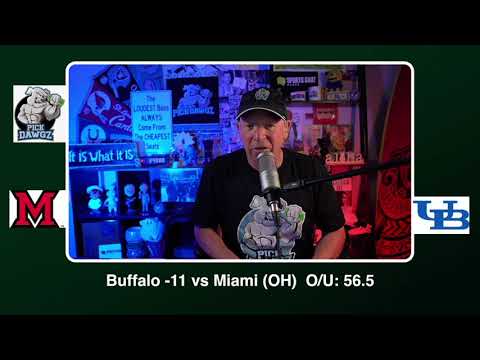