The Akron Zips and Ohio Bobcats face off in a MAC college football showdown on Tuesday at Peden Stadium.

Coming into the season the thought was the Akron Zips would struggle, and after the first game, that looks like it will be the case. In the first game of the season, against Western Michigan, the offense couldn’t get anything going, and the defense couldn’t stop anything. The Zips gave up 58 points in the overall including 21 points in the third quarter. On offense, Akron is a run first team and that was really the only offensive success they could find with two players rushing for at least 65 yards. At quarterback, Akron is led by Zach Gibson who threw for 125 yards, one touchdown, and one interception. Of course the offense is going to need to be better in this game but if the defense struggles, they are going to have real issues keeping this game close.

On the other side of this matchup is the Ohio Bobcats who played their first game of the season against Central MIchigan and there was really no excuses for losing, but they couldn’t get it done. Ohio’s offense didn’t score in the 4th quarter and that was the difference as they lost by three points. At quarterback, Ohio is led by Kurtis Rourke who only completed 12 passes in the first game but it went for 231 yards and two touchdowns. Isiah Cox was the leading receiver catching four passes for 102 yards and one touchdown. On defense, Ohio struggled in the first half and this is a game where the defense can’t struggle. If Akron keeps this game close, that would be disappointing for Ohio.

Ohio didn’t look great in their first game, but there is no doubt they are the much better team in this matchup. Akron’s defense is a mess and Ohio is going to run up the score.. Back Ohio to win the game and cover the spread. 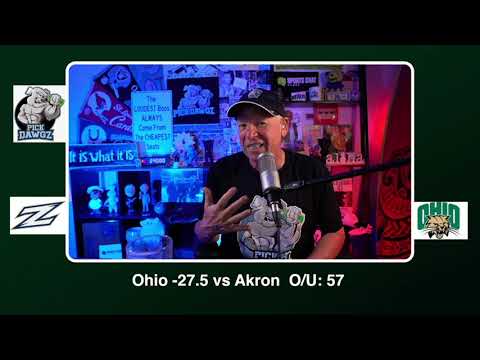