The West Virginia Mountaineers will travel to DKR-Texas Memorial Stadium to take on the 22nd ranked Texas Longhorns this Saturday afternoon in College Football action.

The 22nd Texas Longhorns won their 2nd straight game and improved to 4-2 (3-2 Big 12) on the season after upsetting the 6th ranked Oklahoma State Cowboys, 41-34 in OT., this past Saturday. In an exciting back-and-forth game that went into OT, Texas was able to get a big defensive stop to win the game after they opened up OT with a TD. Texas was outgained by an Oklahoma State by a 530-287 margin, however, won the turnover battle by a 5-0 margin in the victory. Leading the way for the Longhorns was QB Sam Ehlinger who completed 18 of 34 passes for 169 yards & 3 TD’s.

Texas was able to pull out a big win over Oklahoma State, but I’m not sold on the Longhorns as they haven't looked good for the majority of the year and I think their victory over Oklahoma State was more do to Oklahoma State losing it with unforced errors than the Longhorns winning it with solid play. Texas offense certainly has plenty of offensive weapons, however, this is a very good West Virginia defense and as I think Jarret Doege & Leddie Brown will put up plenty of offense against the Texas defense, I think the play here is to take West Virginia and the points. Good Luck! 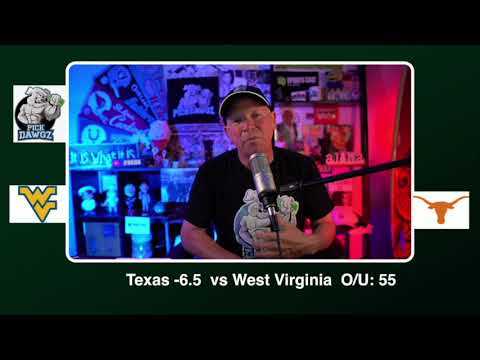