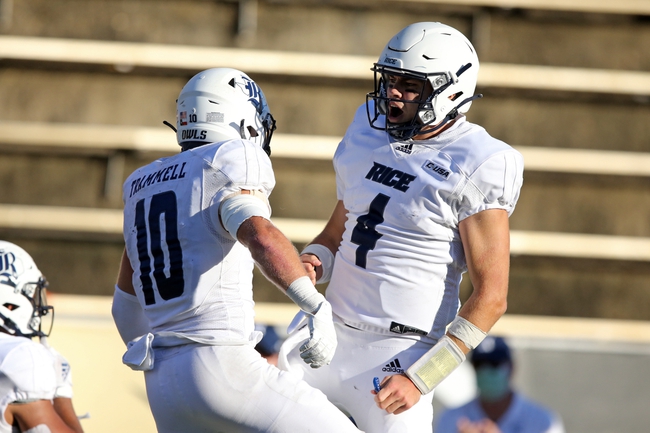 The UTSA Roadrunners will travel to Rice Stadium to take on the Rice Owls this Saturday afternoon in College Football action.

The UTSA Roadrunners dropped to 4-4 (2-2 C-USA) on the season after being defeated by the FAU Owls, 24-3, this past Saturday. UTSA struggled offensively against the FAU defense and could not fight back after going into halftime trailing by a 17-3 margin. UTSA was outgained by a 332-230 margin and did not force a turnover in the loss. Leading the way for the Roadrunners, QB Frank Harris who completed 12 of 26 passes for 109 yards while also adding 66 rushing yards.

The Rice Owls improved to 1-1 (1-1 C-USA) on the season after defeating the Southern Mississippi Golden Eagles, 30-6, this past Saturday. Rice dominated Southern Mississippi on both sides of the ball throughout the game and had no trouble securing the victory after going into the 4th quarter with a 23-6 lead. Rice outgained Southern Mississippi by a 412-269 margin and won the turnover battle by a 3-1 margin in the victory. Leading the way for the Owls was QB Mike Collins who completed 12 of 17 passes for 233 yards & 4 TD’s.

UTSA struggled agianst FAU, however, the Roadrunners have had some success this season as they picked up a nice win agianst Louisiana Tech and gave BYU all they could handle in a 27-20 loss. Rice had a bunch of games earlier in the season cancelled due to COVID-19 and opened up their season with a disappointing loss to MTSU, however, the Owls looked great last weekend agianst Southern Mississippi and seem to have some solid offensive weapons in Mike Collins & Austin Trammell. Rice looked great last week and as I think their passing attack will be able to have some success agianst the Roadrunners, I am taking Rice to cover this small home spread. Good Luck!