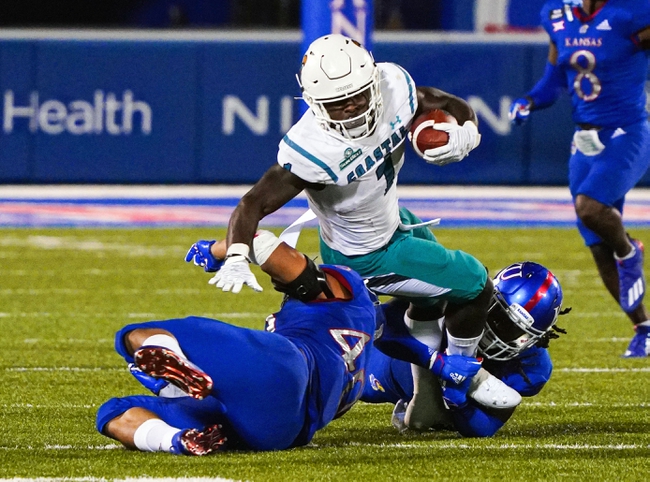 The South Alabama Jaguars and Coastal Carolina Chanticleers face off on Saturday in a college football showdown at Brooks Stadium.

South Alabama had won two games in a row heading into their last game against Georgia Southern, a game they lost by seven points. In the two wins, South Alabama averaged 34 points and when this team has struggled it’s been the offense that has let them down in a big way. On the season South Alabama is averaging 25.2 points per game while the defense is giving up 24.7 points per game but their defense is going to have their hands full in this game. At quarterback South Alabama is led by Desmond Trotter who has thrown for 944 yards, eight touchdowns, and two interceptions. South Alabama also needs to try and control the clock with their run game. The less the ball is with Coastal Carolina,, the better the chance South Alabama has to win.

On the other side of this matchup is Coastal Carolina who are one of the best mid major teams in all of the country. Coastal Carolina has won all six of the games they have played and also covered the spread in five of the games. In the last game against Georgia State, they were only 3.5 point favorites but they made quite the impression winning 51-0. On the season Coastal Carolina is averaging 40.3 points pe game while the defense is giving up 18 points per game. Grayson McCall has been under center for the Chanticleers and he has been a game changer for the team throwing for 1,184 yards, 15 touchdowns, and one interception.