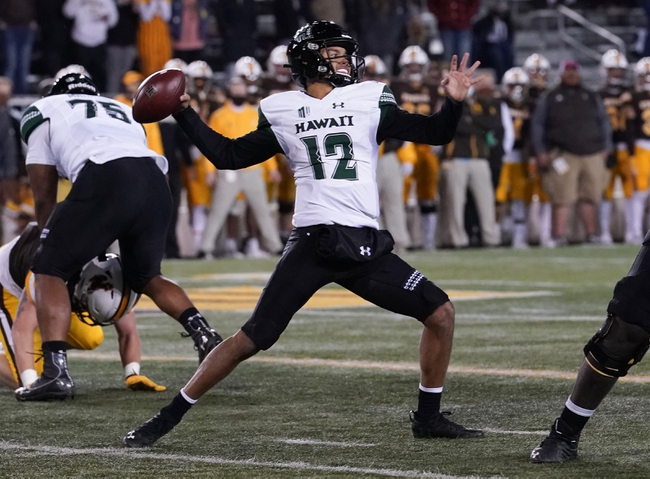 Where to Watch: Spectrum PPV Stream live sports and exclusive originals on ESPN+. Sign up now!

The New Mexico Lobos and Hawaii Rainbow Warriors face off on Saturday night in a college football showdown at Aloha Stadium.

New Mexico had their first game of the season cancelled because of COVID and in the last game against San Jose State, there were some major struggles with their defense that led them down against San Jose State. The Lobos secondary is young, and they showed some of that youth giving up 481 yards and five touchdowns through the air. On offense, New Mexico did find some success putting up 21 points.Quarterback Teveka Tuioti found success throwing for 294 yards, two touchdowns, and one interception. In this game New Mexicois facing a Hawaii team that has shown they have a dynamic defense so it’s going to be important the defense steps up in a big way and tries to make this a low scoring game.

On the other side of the matchup is Hawaii who looked good in their first game of the season, but against Wyoming, the offense really struggled and that led to a 31-7 defeat. After having so much success in Game 1, Chevan Cordeiro had his struggles in Game 2, throwing for only 110 yards, zero touchdowns, and zero interceptions. Cordeiro is a dual-threat quarterback, but they need more production out of his arm this week. On defense, Hawaii is giving up 25 points and 401 yards per game. Hawaii has the offense to keep up in a shootout, but their defense stepping up would make this series easier.

These are two offenses who can score and especially New Mexico’s defense is terrible. Look for this game to have very little defense played and for this game to fly over the total. In terms of the side it's a lean to New Mexico but the stronger play is with the over.