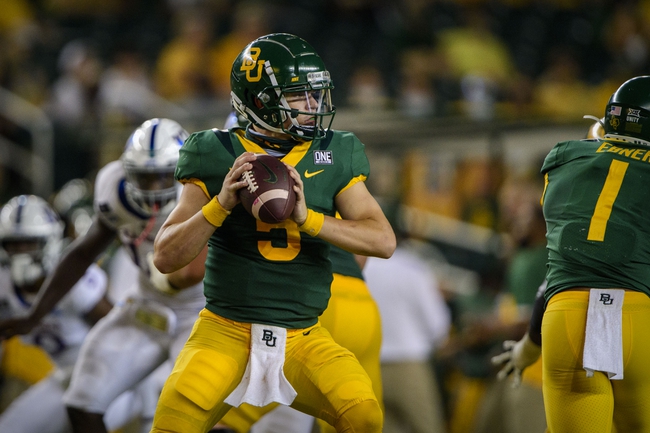 The TCU Horned Frogs will travel to McLane Stadium to take on the Baylor Bears this Saturday afternoon in College Football action.

The TCU Horned Frogs lost their 2nd straight game and dropped to 1-3 (1-3 Big 12) on the season after being defeated by the Oklahoma Sooners, 33-14, this past Saturday. TCU struggled on both ends of the field and never really could fight back into the game after falling behind by a 17-0 margin early in the 2nd quarter on a 50-yard TD reception by the Sooners Marvin Mims. TCU was outgained by Oklahoma by a 498-351 margin and did not force a turnover in the loss. Leading the way for the Horned Frogs was QB Max Duggan who completed 25 of 35 passes for 276 yards & 1 TD.

The Baylor Bears lost their 2nd straight game and dropped to 1-2 (1-2 Big 12) on the season after being defeated by the Texas Longhorns, 27-16, this past Saturday. Baylor struggled offensively agianst the Texas defense and could not fight back after a 9-yard TD run by the Longhorns Sam Ehlinger gave Texas a 27-3 lead with :20 seconds left in the 3rd quarter. Baylor was outgained by Texas by a 429-316 margin in the loss. Leading the way for the Bears was QB Charlie Brewer who completed 30 for 43 passes for 256 yards & 2 TD.

TCU has struggled this season and it is going to be hard for the Horned Frogs to pick up victories as they are allowing their opponents to average over 30.0 ppg and do not have much offensively outside of Max Duggan. It has been a tough season for Baylor overall as they have missed a ton of action due to COVID-19, however, this is a decent team have been competitive in their in their road losses at West Virginia & Texas. Baylor’s offense behind Charlie Brewer & John Lovett should be able to put up some points in this one and as I just don't see Max Duggan and the Horned Frogs offense finding success on the road, I think the clear play here is to take Baylor and the points. Good Luck!