The Mississippi State Bulldogs and Alabama Crimson Tide face off on Saturday in Bryant-Denny Stadium.

After Mississippi State won their first game of the season over LSU there was a lot of buzz about the team, but it’s been all disappointment since then. This was supposed to be an air raid attack but over the last three games they have scored only 30 points total. KJ Costelllo found a lot of success under center in Game 1, but since that point, he has turned the ball over too much. On the season, Costello has thrown ten interceptions. Backup quarterback Will Rogers has gotten some playing time, and maybe the team will turn to him soon. On defense, Mississippi State hasn’t been terrible but they could be a lot better than the 26.8 points per game they gave up.

On the other side of this matchup is the Alabama Crimson Tide who have won five games this season and covered the spread in the last two. Against Tennessee in the last game it was pretty clear from early in the game it was going to be a blowout and they ended up winning 48-17. One big issue for Alabama going forward is they won’t have star wide receiver Jaylen Waddle who is dealing with an ankle injury that will cost him his season. On the season Alabama is averaging 48.4 points per game while the defense is giving up 26.4 points per game. Crimson Tide quarterback Mac Jones has thrown for 1905 yards, 12 touchdowns, and two interceptions.

Mississippi State’s offense is struggling and that will continue in this game. Look for their lack of scoring to keep this game under the posted total. It's a lean to Alabama to cover the spread but that play isn't as strong as the under. 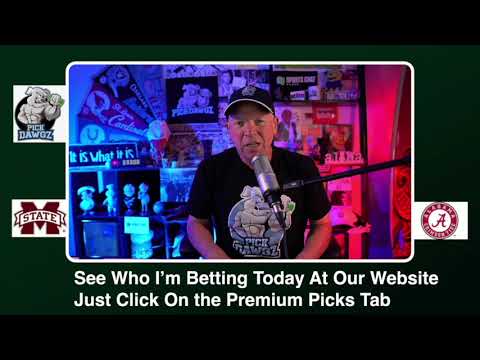